TWO people have been injured after a chemical leak at a major hospital that saw the building evacuated.
Emergency services rushed to the scene just before 6pm this evening after being alerted to the leak in Royal Hampshire County Hospital, Winchester. 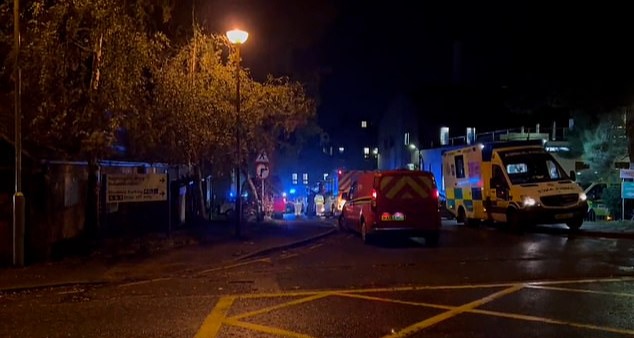 1Emergency services rushed to a hospital after a chemical leak on-siteCredit: Twitter/Harry ActonCrews wearing hazmat suits were spotted entering the premises.
At least four fire engines were seen at the site on Romsey Road, with firefighters attending from Eastleigh, Redbridge and Romsey.
A spokesperson for Hampshire and Isle of Wight Fire and Rescue Service (HIWFRS) said that they worked to contain the five litre leak near to one of the hospital’s operating theatres.
They added: “We were called at 17:42 this evening following a small chemical leak at the Royal Hampshire County Hospital in Winchester.

“The area was evacuated and two casualties assessed by an on-site team.
“Crews from Eastleigh, Redbridge and Romsey worked to contain the spillage and make the contaminated area safe.
“We have worked closely with the onsite teams to ensure there was no impact on hospital services.
“The stop message came in at 21:09 with crews now returning to station.”
During the incident, ambulances were seen parked away from the hospital’s emergency department, reports ITV.

Chief nurse at Hampshire Hospitals NHS Foundation Trust Julie Dawes told ITV: “We can confirm that the local fire service are currently on-site at our Winchester hospital, purely as a precautionary measure.
“There is no impact to patient care or our services and we, as ever, continue to be here for anyone who requires urgent and emergency care.”