WREATHS placed in front of Edinburgh’s War Memorial were set on fire as Nicola Sturgeon blasted ‘disgraceful’ vandals.
Fire crews were called to the capital’s City Chambers at around 5am on Monday to reports of a blaze. 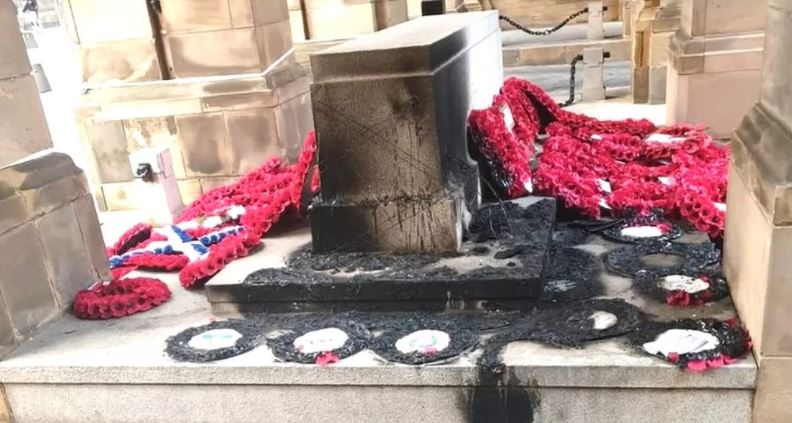 1Fire crews were called to the capital’s City ChambersCredit: City of Edinburgh CouncilFootage posted on TikTok by user auldedinburgh shows the charred remains of poppy wreaths laid to commemorate Remembrance Sunday.
First Minister Nicola Sturgeon hit out at the “sickening and disgraceful” culprits.
She wrote on Twitter: “Utterly beyond comprehension that someone would vandalise a war memorial on Remembrance Day – sickening and disgraceful.
“I hope those responsible are identified and brought to justice.”
Police confirmed to the BBC they are probing the fire, which is thought to be deliberate.
Ch Insp Murray Tait said: “Our inquiries are ongoing after poppy wreaths were set on fire at the war memorial in High Street, Edinburgh about 05:00 on Monday.
“Officers are carrying out inquiries and gathering CCTV footage to find out more information on whoever is responsible.
“I utterly condemn this appalling act of vandalism, especially at this time of year when remembrance services have just been held across the country.”

CCTV in the area is being checked and witnesses are being urged to come forward.
The First Minister was among many who laid wreaths of poppies at the Stone of Remembrance outside the city chambers, the first such gathering since all Covid restrictions were lifted.
Members of the three branches of the Armed Forces marched down the Royal Mile before a short service took place outside the city chambers, led by Rev Calum MacLeod.
After the one o’clock gun was fired from Edinburgh Castle at 11am, a two-minute silence was observed.
We pay for your stories and videos! Do you have a story or video for The Scottish Sun? Email us at scoop@thesun.co.uk or call 0141 420 5200