A CHILLING satellite image reveals a Russian nuclear-capable missile has been moved to within striking distance of London.
The hypersonic missile – codenamed Killjoy by Nato forces and Dagger by the Russians – has been a part of Vladimir Putin’s arsenal since 2018 and has a range of more than 1,200miles. 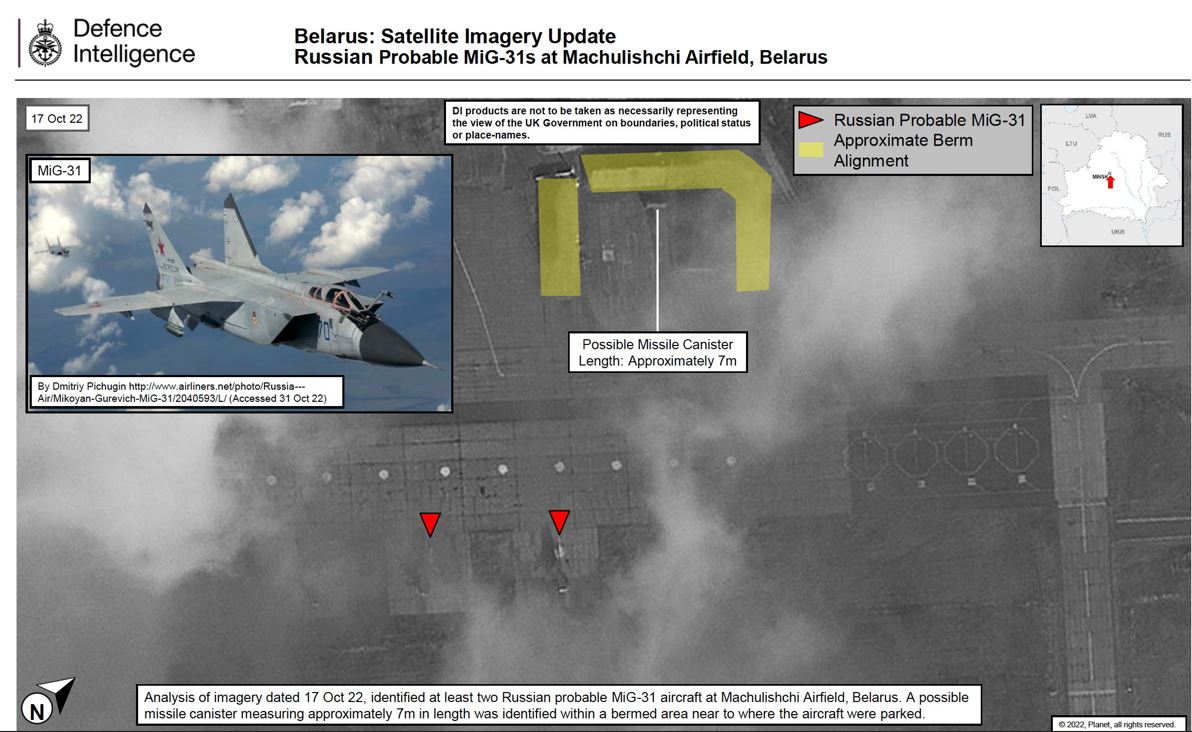 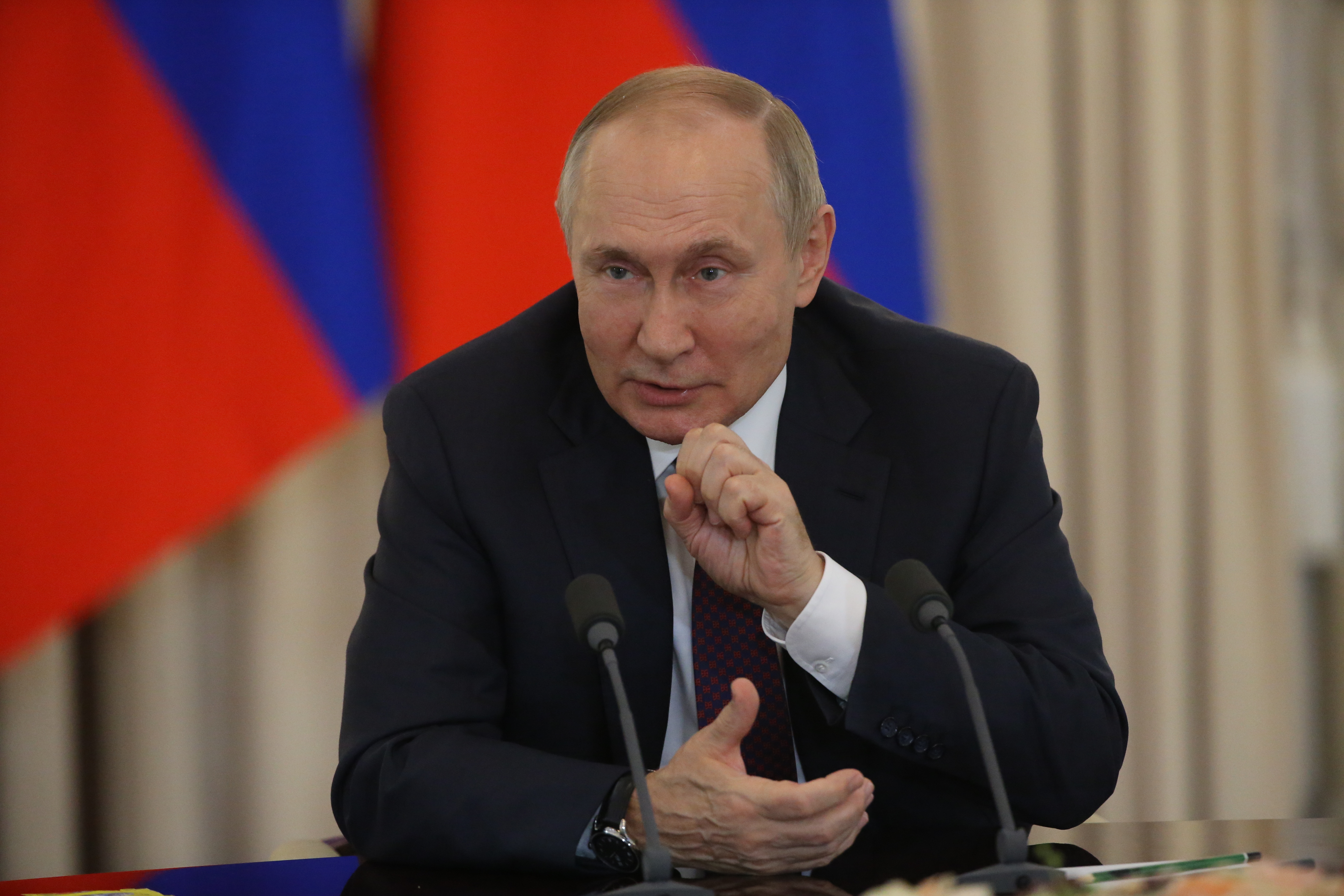 4Putin, pictured, is believed to be sending a threatening message to the WestCredit: Getty 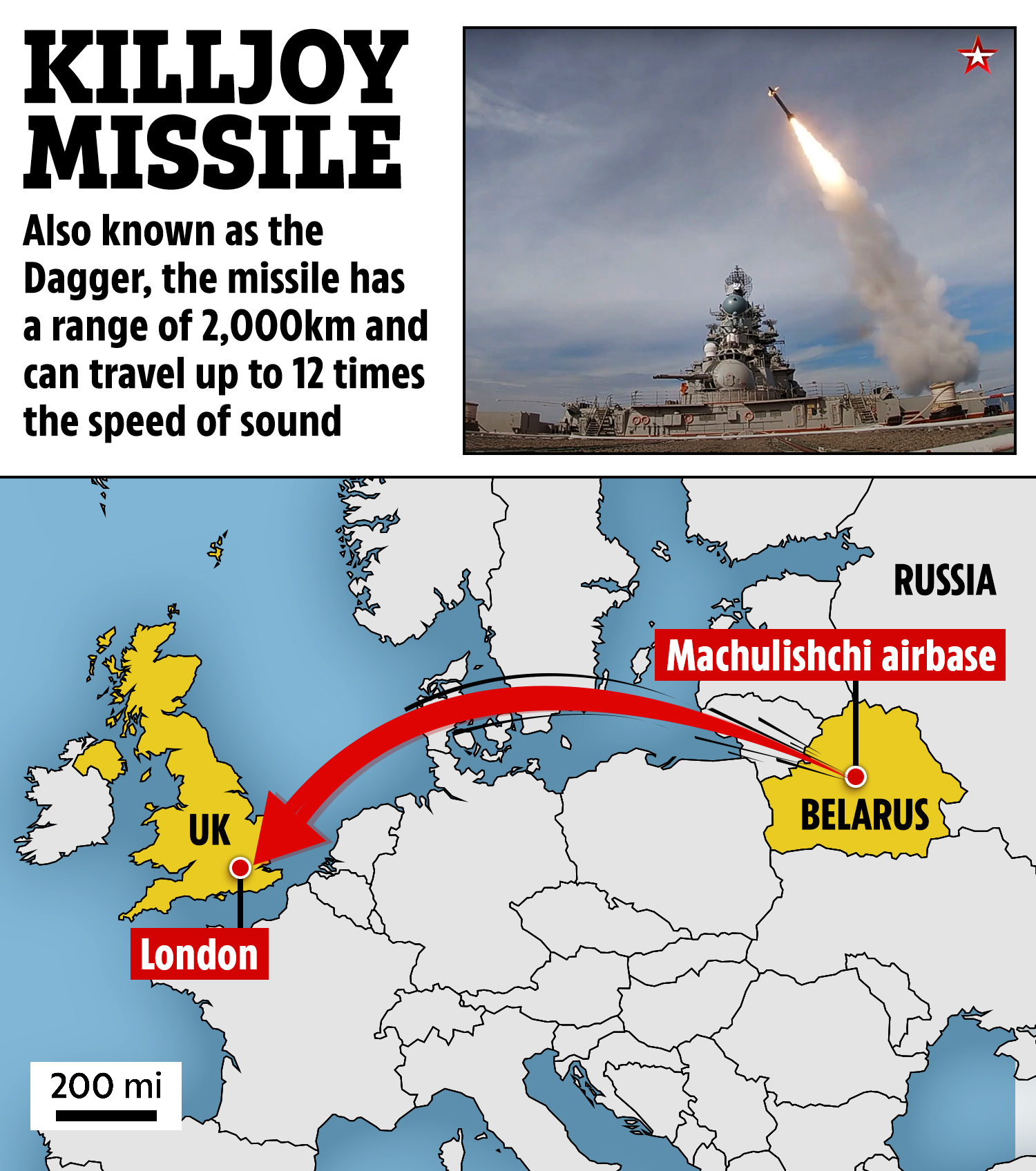 The deadly weapon, which can be loaded with up to 1,000 pounds of explosives or a nuclear warhead, has been moved to around 1,100miles from London, according to British intelligence.
The Ministry Of Defence released an intelligence update on Tuesday with an image taken on October 17 at the Machulishchi Airfield, about eight miles south of the Belarussian capital Minsk.
It shows two MiG-31K Foxhound jets near a possible missile canister measuring seven metres in length within a bermed area.
The MoD said the canister was likely to house an As-24 Killjoy air-launched ballistic missile. 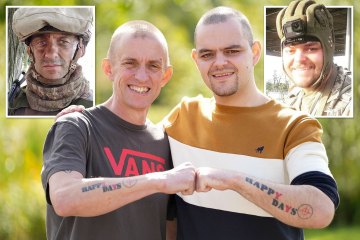 The Killjoy can travel up to 12 times the speed of sound and its ability to be launched from the air via a jet makes it nearly impossible to detect and neutralise from a defensive position.
If launched from Belarus it could hit London in about nine minutes.
Intelligence suggests Russia could strike additional targets other than Ukraine, the MoD said.

“Russia has occasionally launched these weapons during the Ukraine war, but stocks are likely very limited,” according to the update.
“It continues to expend its advanced long-range munitions against targets of limited operational importance.
“It has likely carried out the deployment mainly to message to the West and to portray Belarus as increasingly complicit in the war.”
Despot Putin has an estimated 5,977 warheads at his disposal, of which 1,600 are ready to be deployed, according to the Federation of American Scientists.
With the Dagger said to be one of Putin’s sub-strategic weapons.
The first recorded case of the missile being used in Ukraine was in March, according to a CNN report.
Russia’s Ministry of Defence said it used a Dagger missile to strike an underground warehouse in the Ivano-Frankivsk region.
While the MoD believes the weapon only makes up a small part of Putin’s arsenal, he has shown an escalation in his aerial bombardment campaign as the war in Ukraine continues to rage. 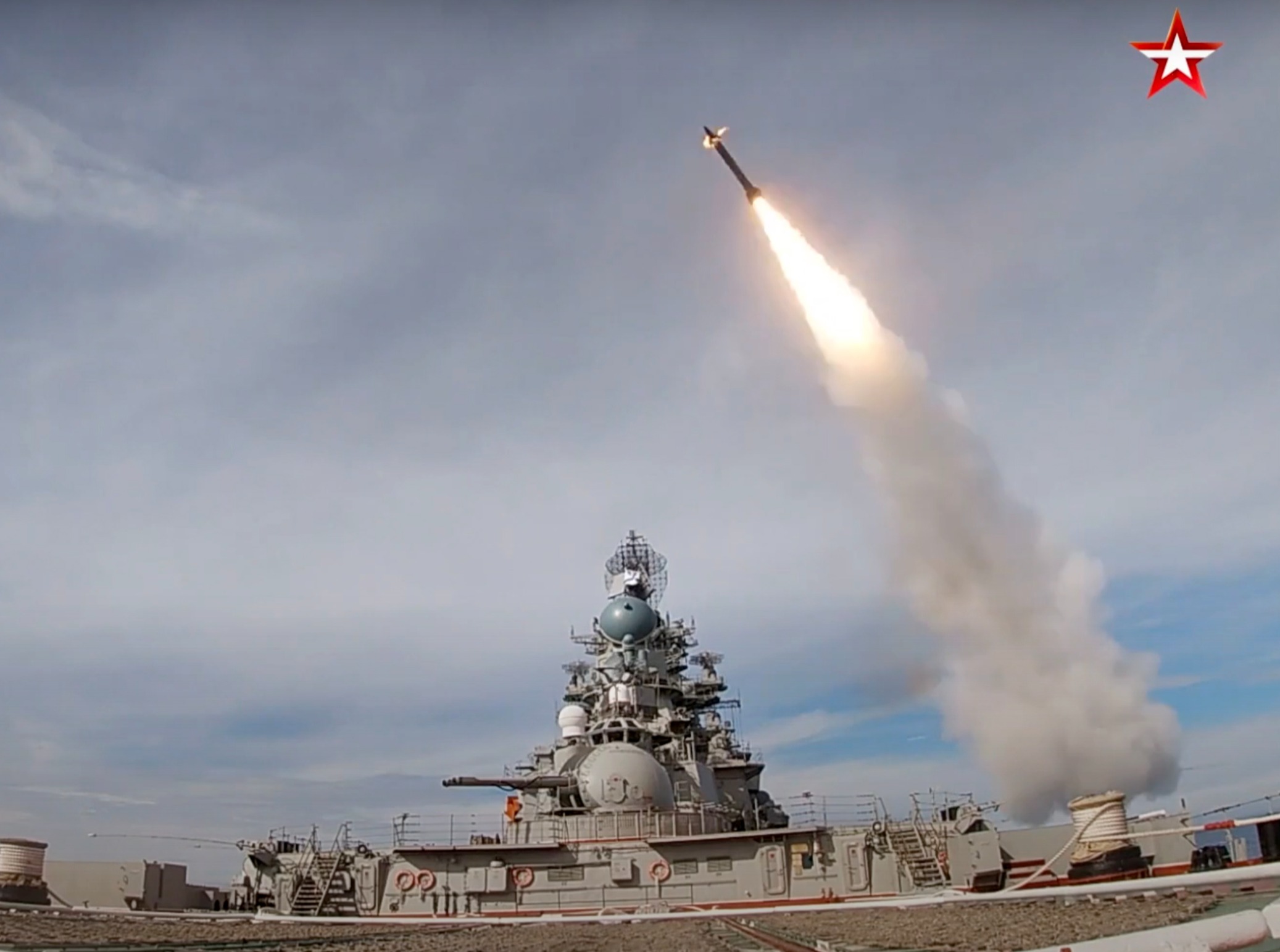 4The Killjoy, or Dagger, can travel 12 times the speed of sound. It is pictured here being launched from a Russian warship in the Barents Sea during drills last year 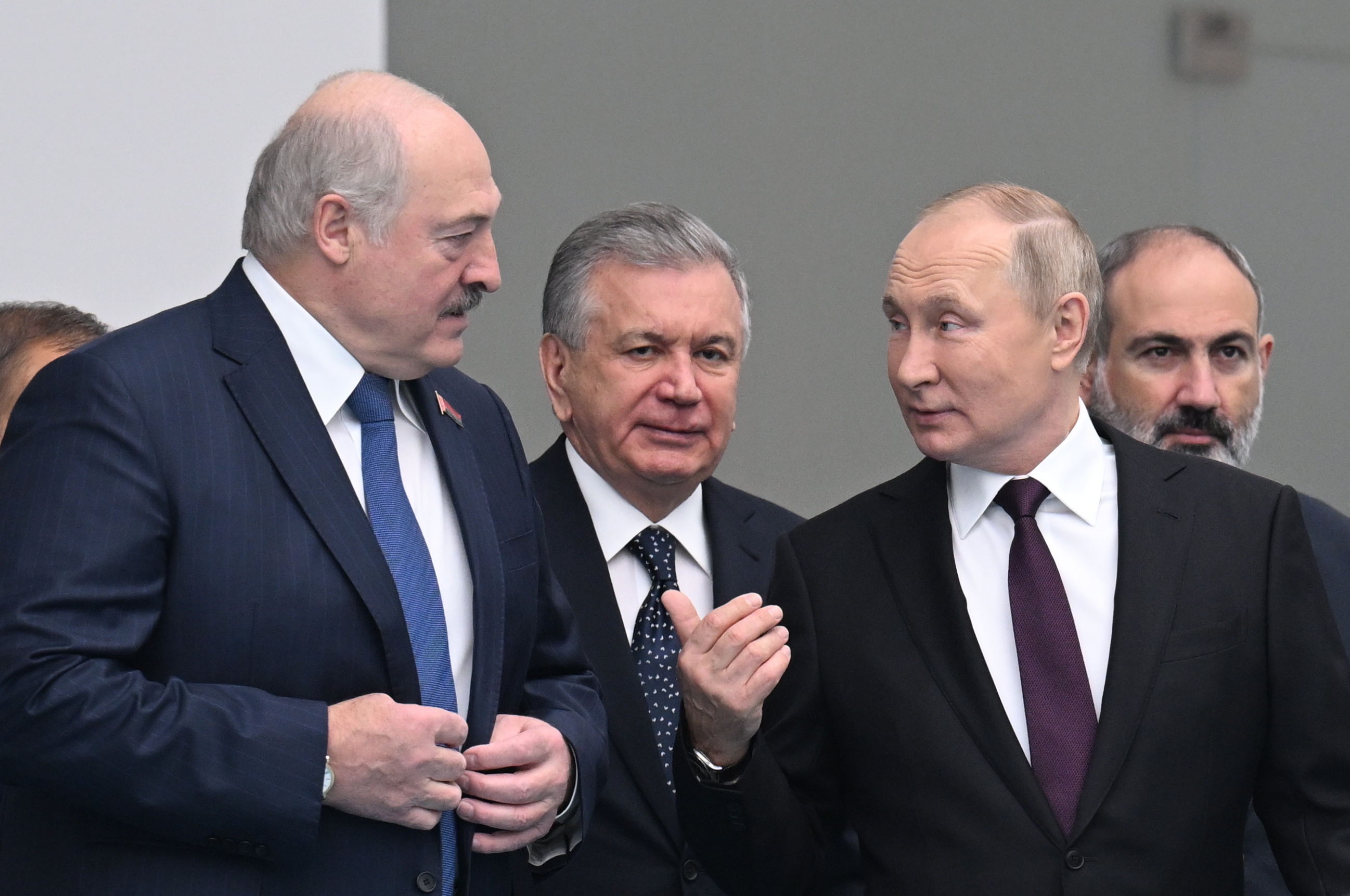 4The MoD said it is likely Russia aims to ‘portray Belarus, whose president Aleksandr Lukashenko is pictured with Putin, as increasingly complicit in the war’Credit: EPA
Story Credit: thesun.co.uk