TAKE a look inside this chilling abandoned property that remains frozen in time – with the dining table still set for dinner.
The former family home in France now resembles the set of a post-apocalyptic horror movie after being blanketed by mould. 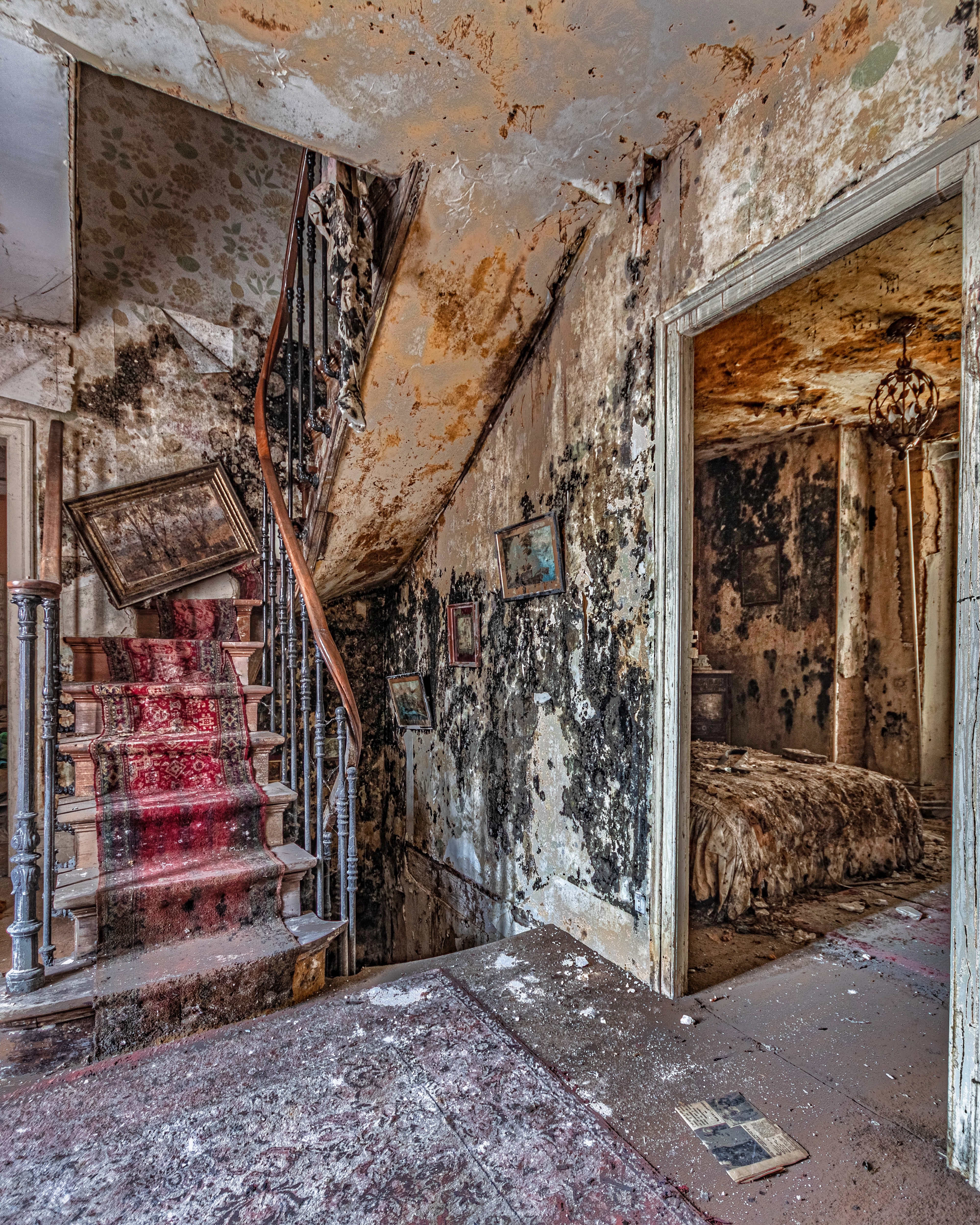 7The eerie home in France has been left to rot for 18 years, seeing it blanketed in thick black mouldCredit: Jam Press/@urbexguide 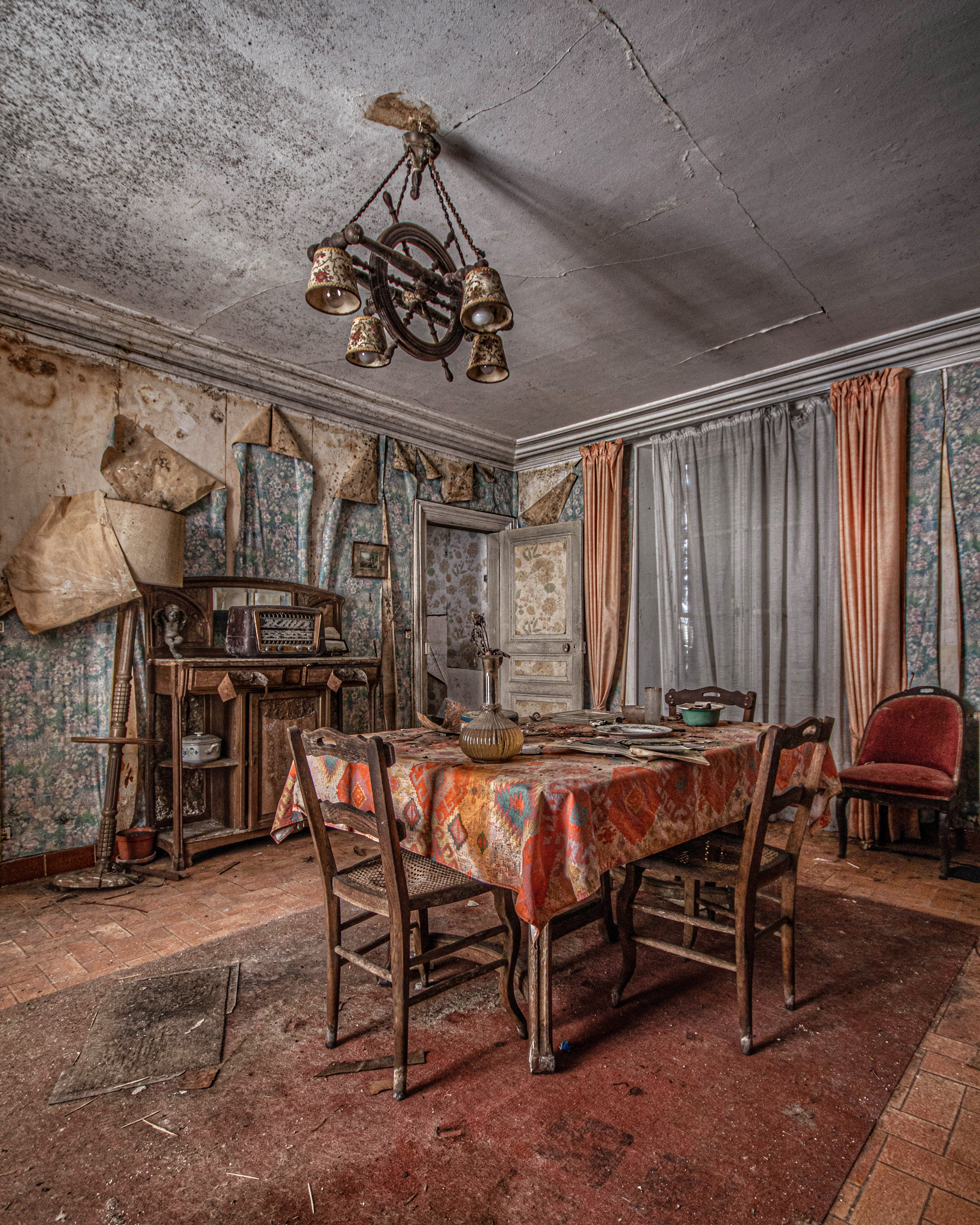 7The dining room table remains chillingly set in the property that is frozen in timeCredit: Jam Press/@urbexguide 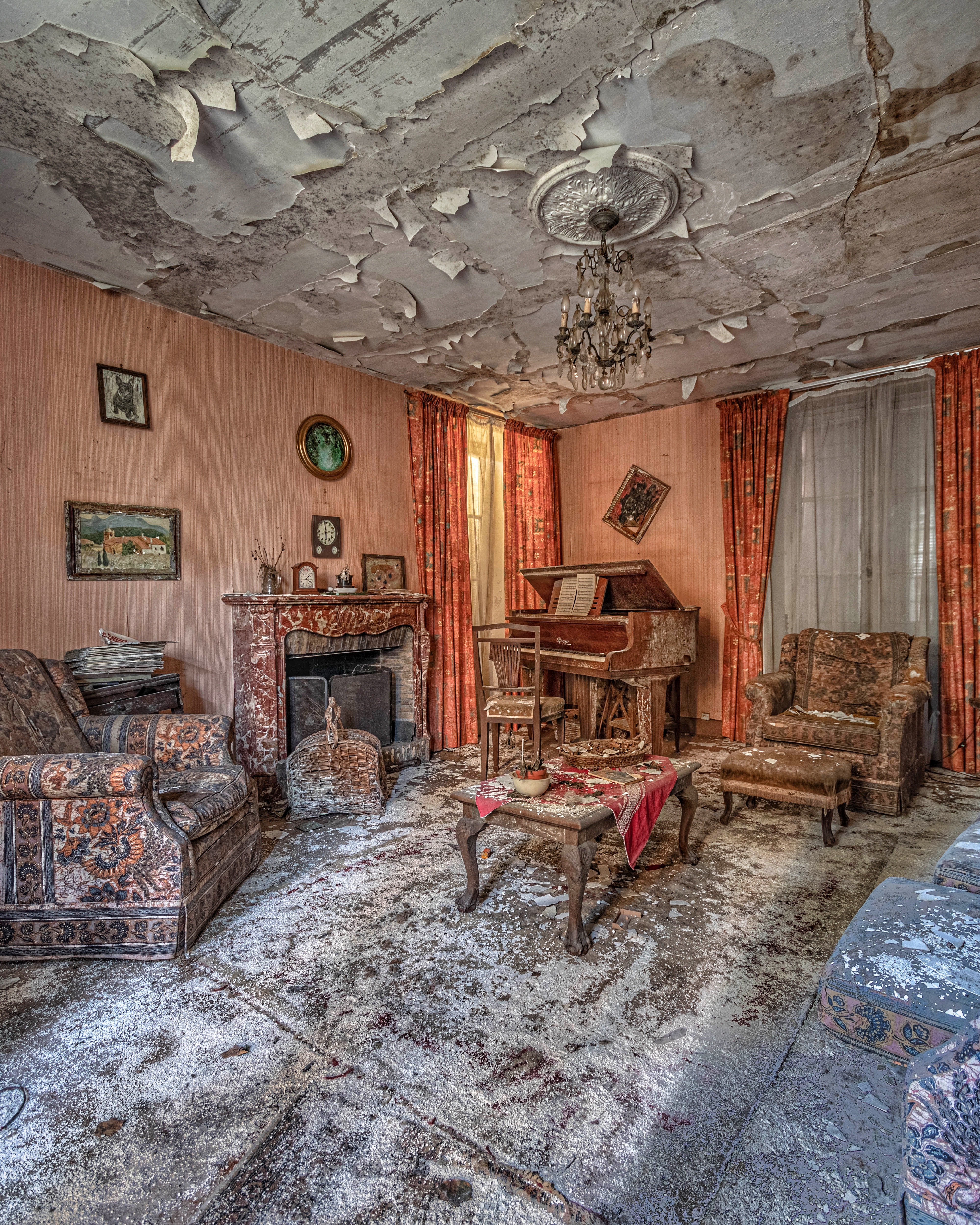 7Years of neglect have taken its toll on the formerly grand family homeCredit: Jam Press/@urbexguide 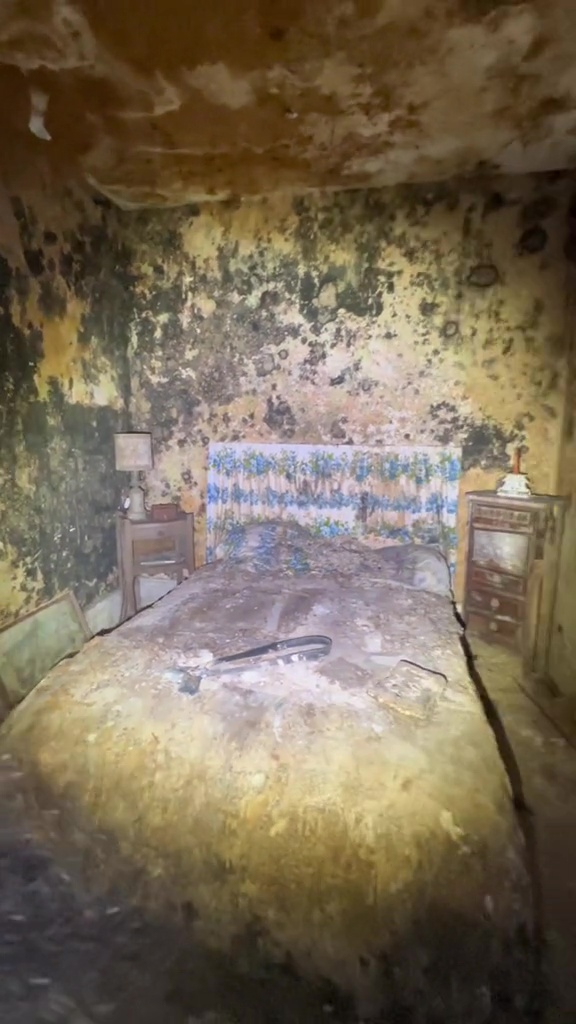 7Mould has engulfed every inch of the deserted homeCredit: Jam Press Vid/@urbexguideUrban explorer Yannik, 21, dared to delve inside the pad that has been deserted for 18 years to document its shocking decline.
The TikToker, from Germany, found the rotting residence that has been compared to the setting of creepy video game Resident Evil.
He filmed his terrifying voyage into the decaying home that has been trapped in the past for almost two decades.
Yannik first heads down a dimly lit hallway which is plastered in dirt and grime, while items of furniture still cling on for dear life. 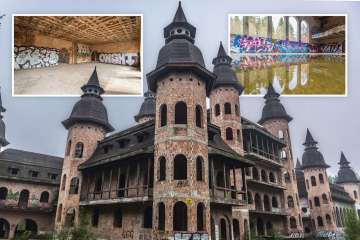 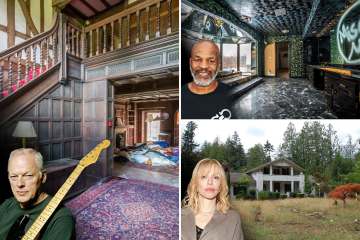 Armed with only his torch, the 21-year-old then heads into a bedroom that has been blacked by thick layers of mould.
Spores cover the walls from the floors to the ceiling, while a double bed and other pieces of furniture still sit in their original places.
The urban explorer then heads into the kitchen which is sullied by years of neglect.
A string of random items are littered across the worktops – as though Yannik has interrupted the former owners rustling up some grub.

He continued to explore the eerie home, before stumbling across a grand dining room, which was also consumed by thick black mould.
The four-seater dining table still remains set, while the wallpaper is seen peeling off after clinging on for nearly two decades.
The living room was pictured in a similar state, with formerly luxury furniture left to rot.
A majestic piano, caked in dust and dirt, sits alongside a regal but now rusted fireplace and spoiled patterned sofas.
The extraordinary decline of the property since its new tenant – mould – took over has left social media users in awe.
Yannik’s clip quickly went viral, racking up over 10 million views and 442,000 likes.
One shocked user commented: “The fact that you can see the spores flying around on the camera.”
Another wrote: “Kind of looks like it’s underwater. You’re swimming in the mould.”
A third said: “Resident Evil 7 vibes.”
And a fourth added: “It’s dangerously beautiful.”
Yannik explained he had managed to find some information about the former owners after hunting through their crumbling home.
The urban explorer said: “You never know what is waiting for you inside these places.
“You really feel like time is standing still for a moment. I’ve never seen so much mould in a house.
“A friend from France gave me some clues for the place and after a while I found it via Google satellite, so I just picked up a friend and we drove seven hours to that place.
“In the location we’ve found some documents of the former people that lived there.
“The last date I found was 2004 so it was abandoned around that time
“They both were pretty successful in their life – the man worked in a bank in the city but I couldn’t find out anything about the wife’s work.
“The woman played some songs on the piano. They had no children and died in 2004.
“Since then, no one took care about their home and in France they have a really weird heritage system, so the house has since fallen into disrepair.”

He first began urban exploring in 2019 and decided to document his strange findings on camera as he journeyed across Europe.
The 21-year-old explained he now focuses on finding furnished abandoned pads, “where everything is left behind.” 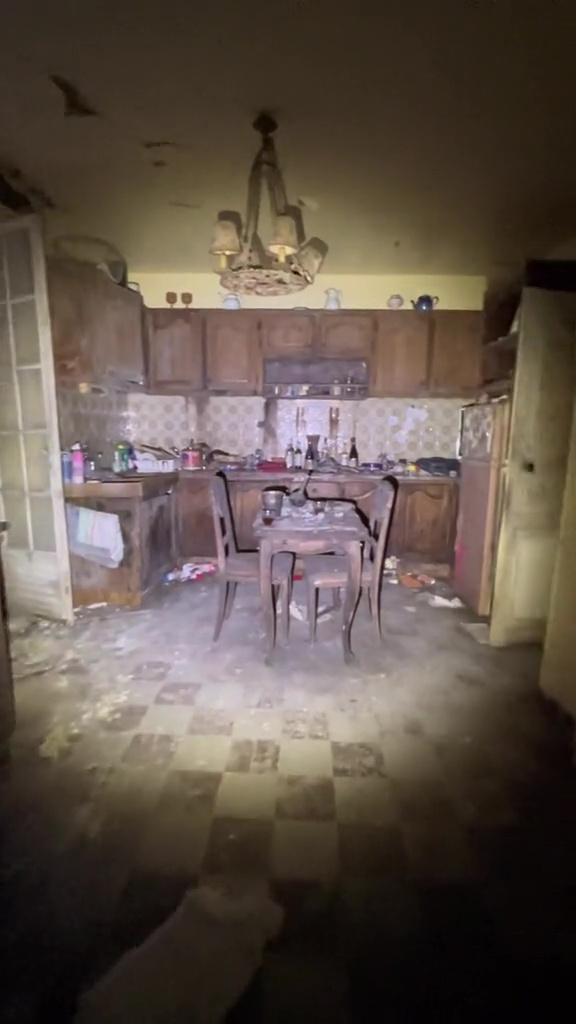 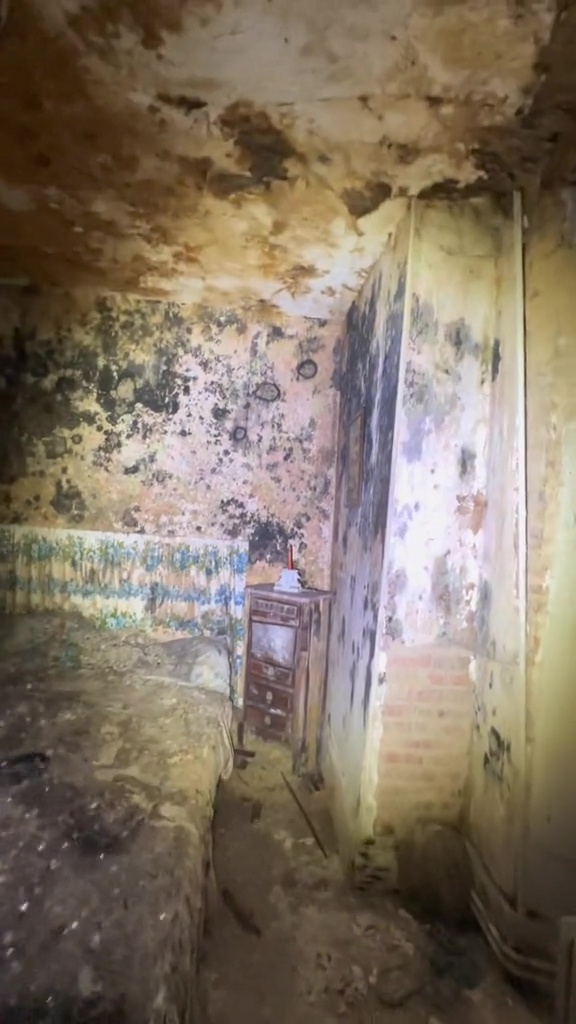 7He filmed his visit to the rotting property to document its incredible declineCredit: Jam Press Vid/@urbexguide 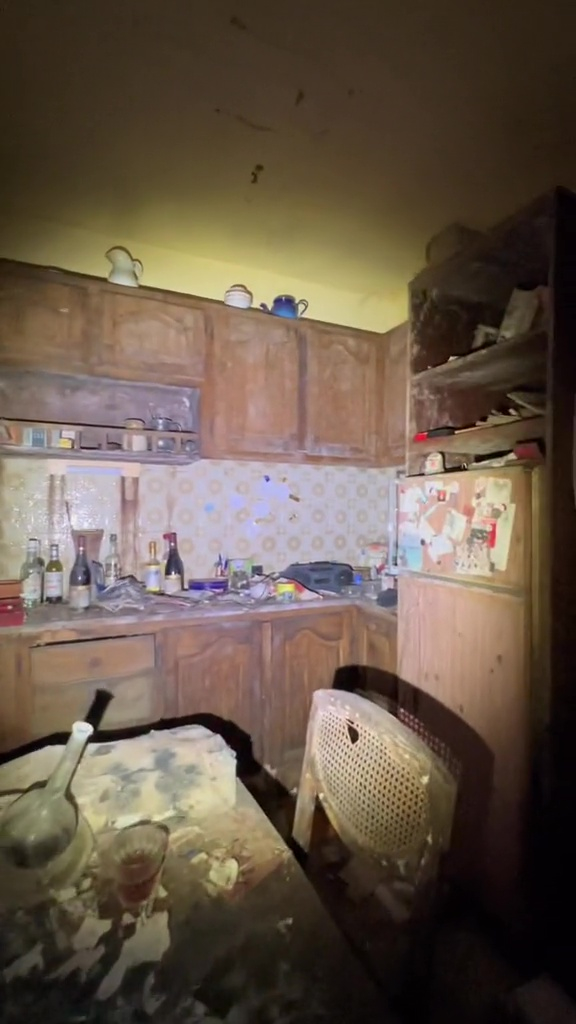