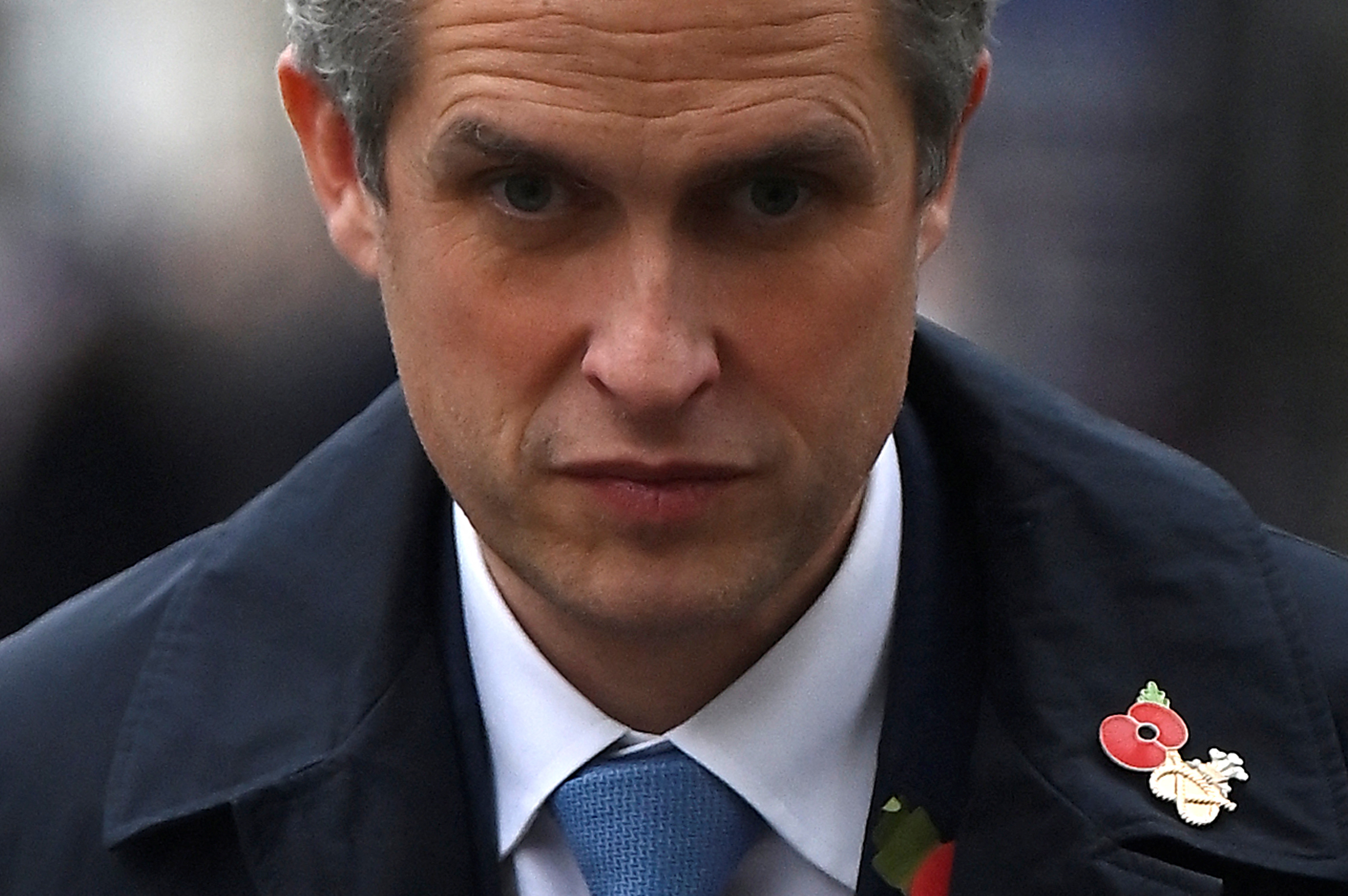 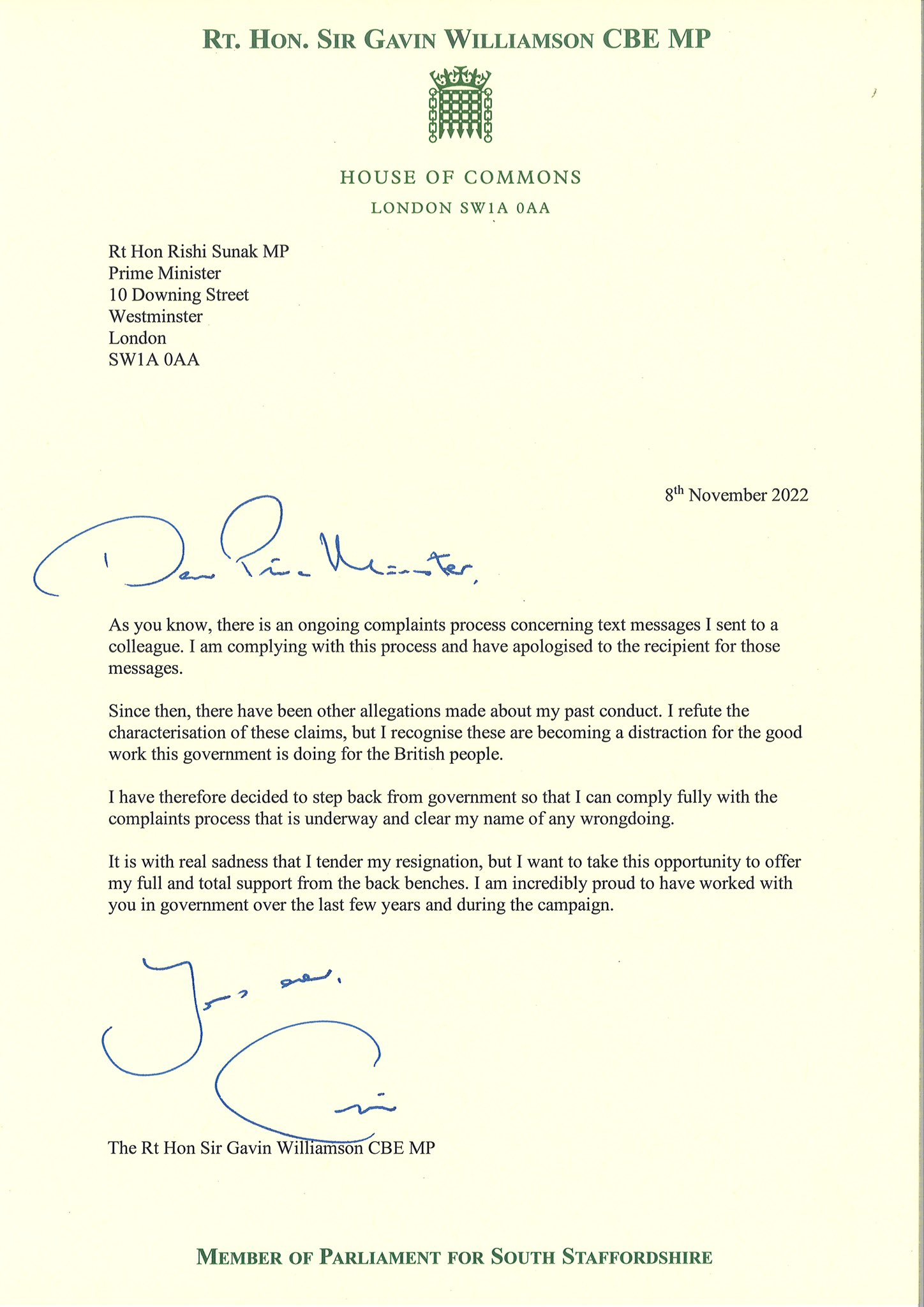 2In a letter Sir Gavin said he “refuted the characterisation” of the allegations but recognised they were becoming a “distraction” to the government.
He said: “It is with real sadness that I tender my resignation, but I want to take this opportunity to offer my full and total support from the back benches.”
The embattled minister faced at least two separate probes into disturbing texts revealed about him during his time as chief whip.
The PM faced defending him at PMQs tomorrow morning after a string of damaging revelations against him.
Just two days ago Mr Sunak told The Sun his words were “unacceptable” and “not right” but stood by his decision to rehire him.
And he had said he wanted to wait until the outcome of a probe.
Mr Williamson was previously sacked under Theresa May after being accused of leaking national security information.
Earlier, his former deputy blew the whistle on “intimidating” behaviour the Cabinet Minister displayed while Chief Whip – including threats to exploit a colleague’s money worries.
It is the latest slew of accusations to hit Sir Gavin after he was controversially parachuted into the heart of Rishi Sunak’s government just days ago.
Ex-deputy chief whip Anne Milton, who worked with Sir Gavin during Theresa May’s premiership, turned the screw with fresh claims of “unethical and immoral” behaviour.
Recalling a time they helped out a Tory MP in financial trouble, she told Channel 4: “I do remember him asking me to give the MP in question the cheque. And he waved it under my nose and said, ‘Make sure when you give him this cheque, he knows I now own him’.”
On another occasion he let rip over email when a female civil servant asked why a minister’s travel plans had changed, she claimed.
He allegedly said: “Always tell them to f*** off and if they have the bollocks to come and see me. F****** jumped up civil servants.”
Ms Milton said Sir Gavin relished learning “salacious gossip” including the “sexual preferences” of politicians.
She likened the top Tory, who famously kept a tarantula called Cronus in his office, to the shadowy Francis Urquart in House of Cards.
A Tory Party probe is already looking at expletive-laden texts he sent to former Chief Whip Wendy Morton, who is also understood to have complained to Parliament’s bullying watchdog.
The Cabinet Office could also launch an investigation into claims Sir Gavin once told a civil servant to “slit your throat” during his time as Defence Secretary.
Government sources said he did not deny using those words but rejected it amounted to bullying.
No10 described them as “serious allegations” and was last night considering what action to take.
The PM’s spokesman said: “It’s true that no formal complaint has been made. But we want to consider proper processes before commenting further.”
Downing Street said Mr Sunak has not spoken with his under-fire Minister – who sneaked into Cabinet yesterday without being seen by the cameras.
Work and Pensions Secretary Mel Stride reckoned Sir Gavin would still be in post by Christmas but warned no minister is “unsackable”.

He said there has long been an “aura or mystique” around Sir Gavin, who famously owned a pet tarantula called Cronus.
Mr Stride told Sky News: “The reality with Cronus is he was much touted but he never actually was released to bite anybody.”