A DAD was out seeing Halloween decorations with his kids when his car was barricaded in by an out-of-control gang of young thugs amid scenes of carnage.
The louts, aged from teens to twenties, used flaming wheelie bins to bring the man’s motor to a stop in Dundee. 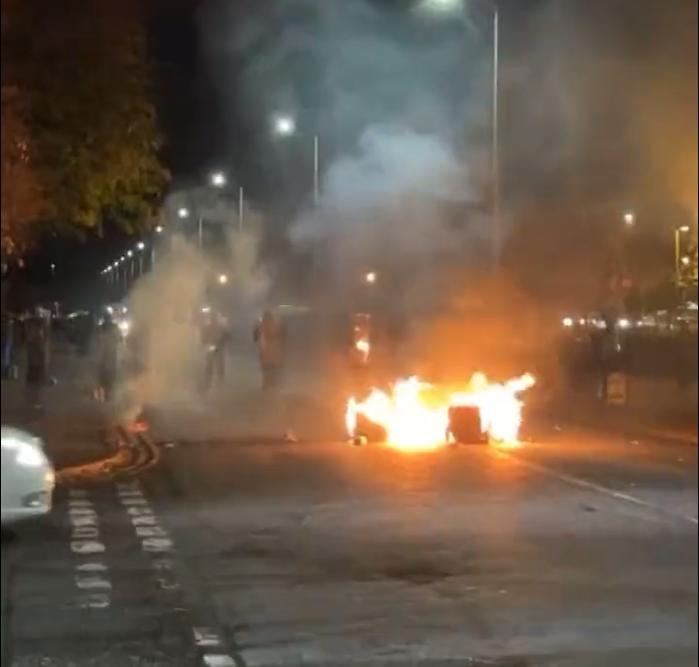 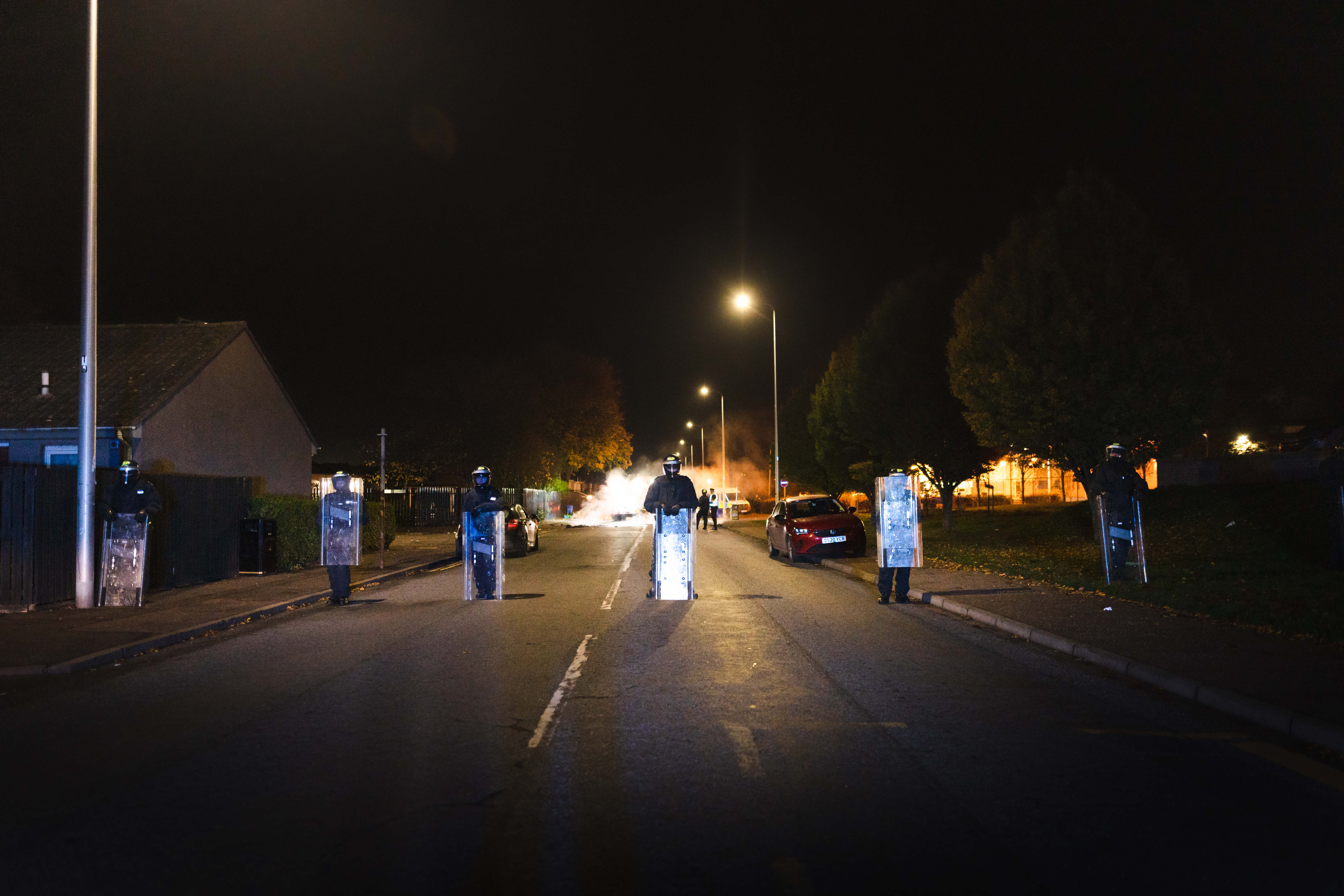 5Riot cops were called in to tackle the violenceCredit: Luke Davies 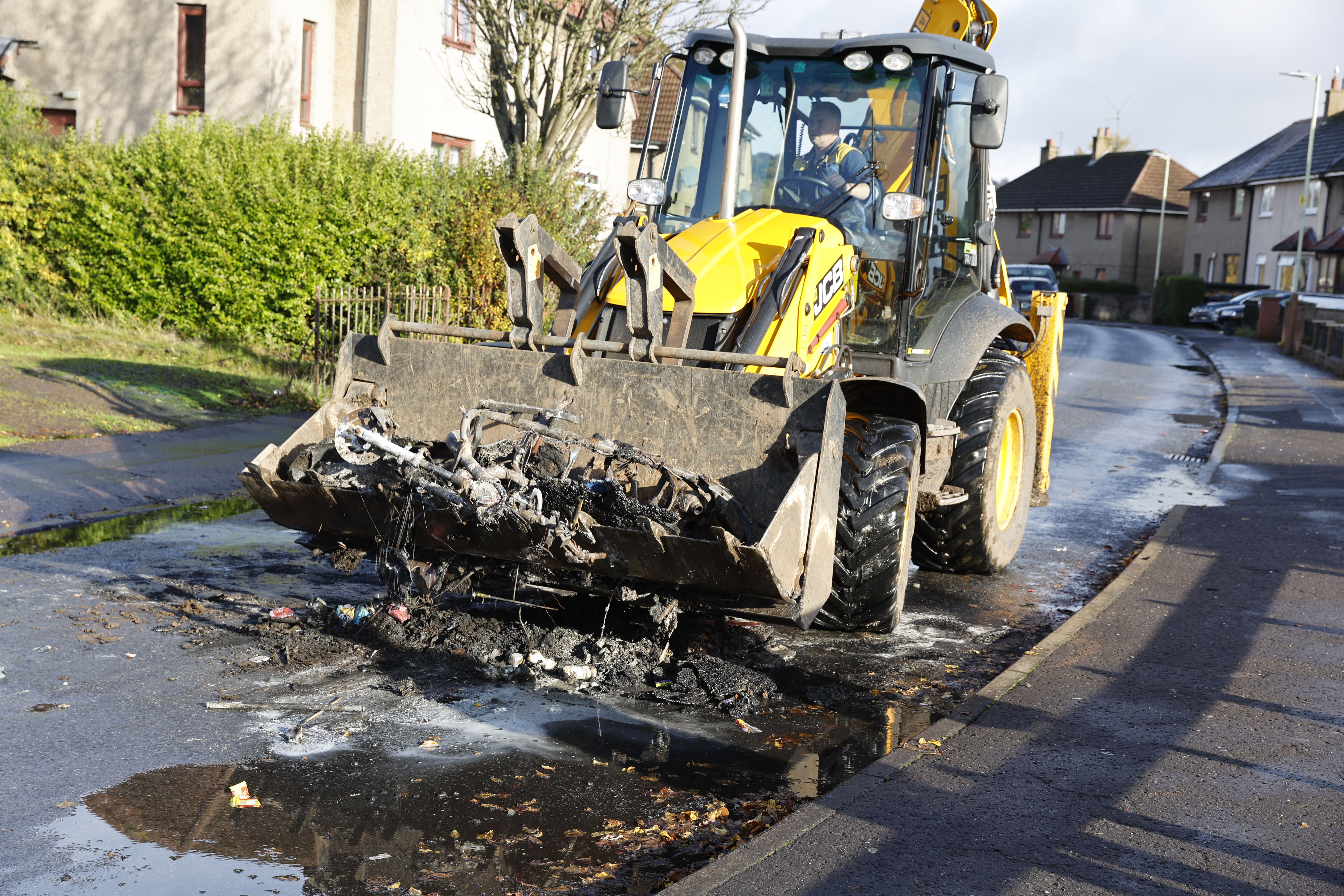 5There was a big clean-up operation following the carnageCredit: News Group Newspapers Ltd. 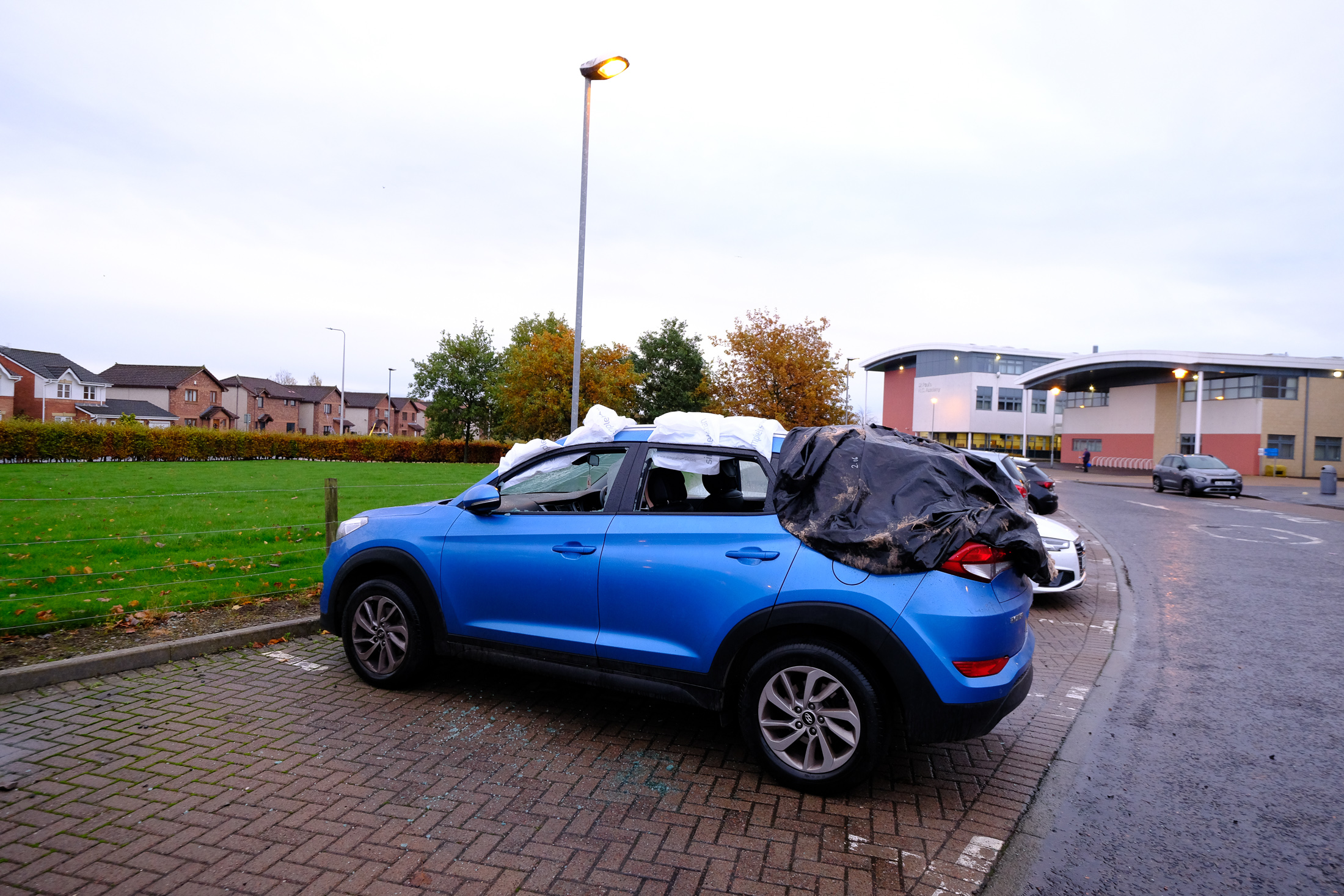 5Cars and buildings, including a school, were vandalisedCredit: Paul Reid 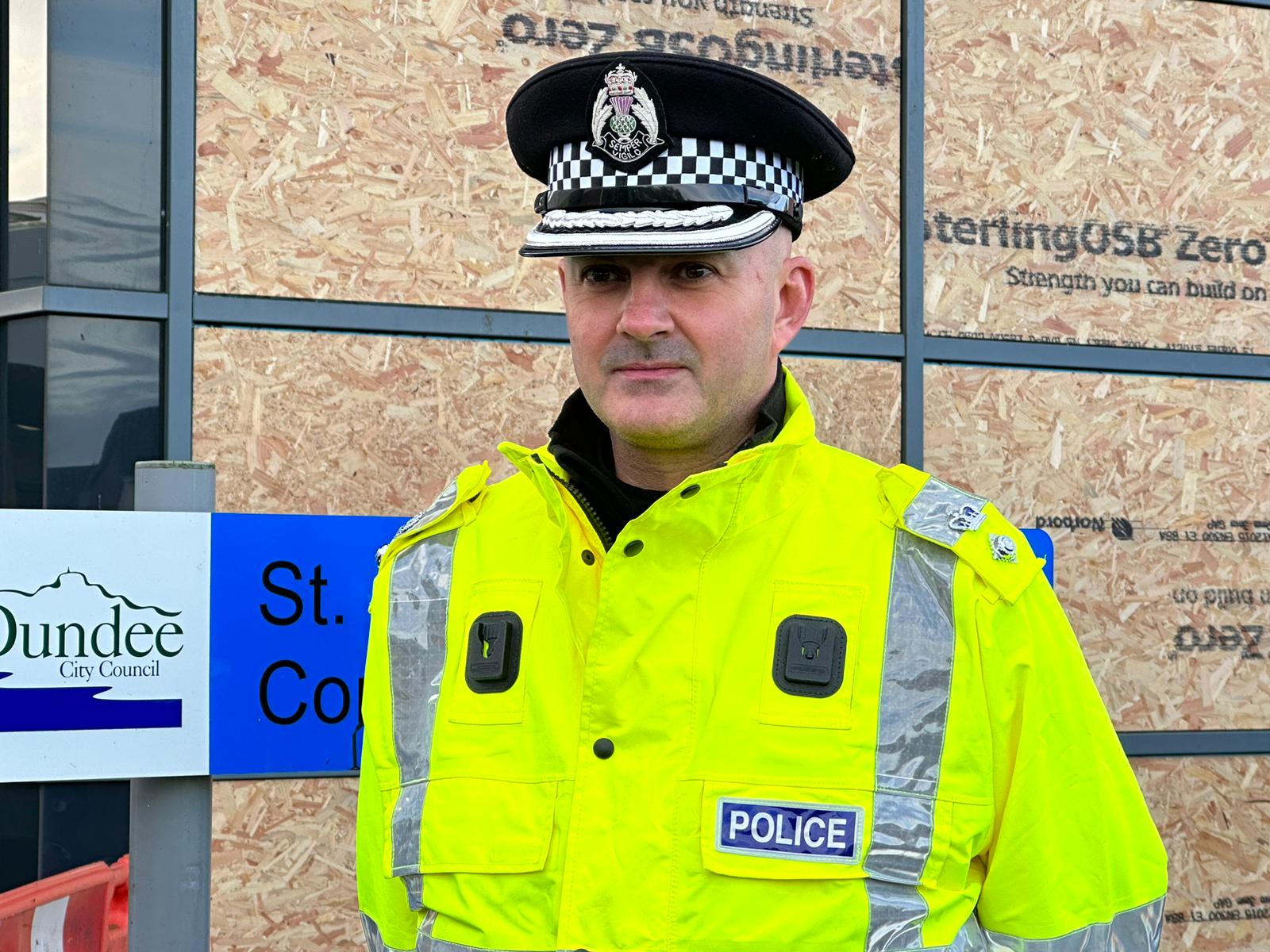 5Chief Superintendent Phil Davison condemned the chaosThey hurled stones and fireworks at the vehicle before they pulled the parent – who has been battling cancer – out by the hair and attacked him in front of his terrified family.
It came amid shameful scenes of mayhem on Monday night in the city’s Kirkton area.
Windows were smashed and firebombs aimed at cars and homes – with some residents accusing cops of not stepping in soon enough.
A police officer was injured during the horror attacks while families were out guising with their youngsters.
And a friend of the injured dad said: “I can’t believe something like this could happen in a Scottish city in 2022.
“The man was out seeing a Halloween house, where everyone goes to take a look because the decorations are so good.
“As folk were driving away these kids came running out of nowhere and blocked the roads.
“They started pulling people out of cars while they were on the road. The dad was dragged out and beaten up while his wife and their three girls were still in the motor.
Most read in Scottish News
“What makes it even worse is that he has cancer and had surgery not long ago.
“The mob were punching and kicking him on the body and stomach. We hope he is going to be OK.”
The battered man’s missus has pleaded for witnesses to the incident to come forward.
She said: “Did anyone see our car and my husband getting jumped while me and my girls were in it? They were throwing bricks, fireworks and trying to set the car alight and stole his key.”
The wife added: “We were held like hostages while they kicked the s*** out of him. They were trying to put a brick through my daughter’s side of the car to get to the keys.”
The traumatised family later escaped but were left traumatised by the attack.
The mum added: “We are home and safe.
“My kids are shaken up but we will be fine.”
Locals told how it was the third year in a row that gangs of youths have run riot in the Kirkton area.
It’s claimed the trouble is linked to the anniversary of the sudden death of dad-of-three Grant Hutchison, 28, in 2020.
Trouble was first spotted on the city’s Beauly Square on Monday night.
Bins and shopping trollies full of rubbish were set alight while fireworks were aimed at passers-by.
A corner shop and school both had their windows smashed.
It’s claimed the 40-strong crowd grew to as many as 100 as word of the chaos spread on social media.
The hoodlums raided gardens for bins and then set up blockades on Balgowan Avenue, where they attacked the dad-of-three.
One local who was trying to make it home said: “I drove into a wall of fire. I had to go across a grass verge to get away.
“It was terrifying. Like something out of a horror movie. My partner recorded what was happening on his phone and they shouted, ‘He’s a grass. Take it off him’.”
The couple said they went to the cops – and found them drinking coffee.
The woman added: “Their reaction was an absolute disgrace.
“There has been trouble here before but I’ve never seen anything like that in my life. It was completely out of control.
“The police could and should have done more to stop it before they eventually did.”
A man told how neds chucked a firework into his motor.
He said: “There was smoke and I was worried it was going to go on fire. They were totally out of order.
“But what could I do? There was about 40 of them. If they had wanted to cause me some serious damage they could have done.”
Locals are now terrified about what may happen in the area on Bonfire Night on Saturday.
One said: “I am dreading it. I can see things escalating.
“Hopefully the police have learned their lesson and nip it in the bud right at the start of the night. ”
Order was eventually restored after several hours when riot cops swarmed in and started using their shields and batons.
John Alexander, leader of Dundee City Council, grew up in the area and his parents live close to where the chaos erupted.
He claimed scenes like those seen in Kirkton would normally only be expected in “an action movie” or “war-torn nation”.
He posted on Facebook: “This reckless behaviour endangers lives, with emergency vehicles unable to pass on Balgowan Avenue, and it costs residents and every taxpayer money.
“I hope every single one of those individuals responsible is identified and dealt with appropriately.
“Given the age of many of those in the videos and images, I expect parents will be equally as outraged and questioning their children, if they knew they were out in that area tonight. Where were your kids tonight? Please ask them.”
He added that the riot “reflected really poorly” on the community and took Kirkton “back four decades”.
Tayside police commander Chief Superintendent Phil Davison told how dealing with mass disorder is “always extremely challenging”.
He said: “There was a significant police presence deployed. But that response needs to be measured to how and when we step in with tactics to quell and disperse groups.
“Sometimes going in too early can antagonise behaviour and make things worse. So we fall back on experienced commanders who are used to dealing with these situations.
“This ensures our tactics and response is appropriate.”
He revealed there will be more cops in the area over the next few days to deter any repeats.
And he warned those responsible that officers are looking for them.

He added: “I’d encourage parents to have conversations with their children about acceptable behaviour and the dangers involved in fireworks and throwing objects.
“I fully understand the distress local residents have suffered. We brought the incident to a conclusion in a quick timeframe and have an investigation ongoing now to bring those responsible to be reported.”
We pay for your stories and videos! Do you have a story or video for The Scottish Sun? Email us at scoop@thesun.co.uk or call 0141 420 5200