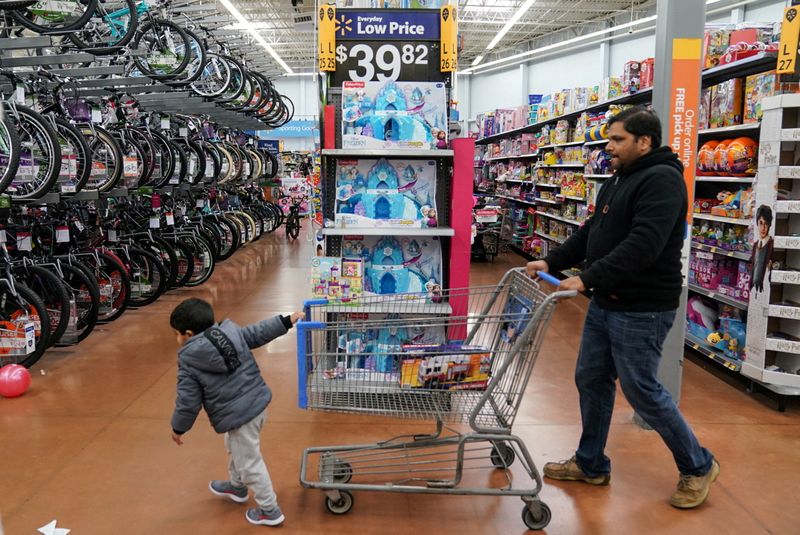 © Reuters. FILE PHOTO: A boy and his father walk through the toy section of Walmart on Black Friday, a day that kicks off the holiday shopping season, in King of Prussia, Pennsylvania, U.S., on November 29, 2019. REUTERS/Sarah Silbiger./File Photo

(Reuters) – U.S. holiday sales are expected to rise at a slower pace this year, a trade group said on Thursday, at a time when decades-high inflation has left Americans struggling to pay bills, draining some of the Christmas cheer from households.

The National Retail Federation (NRF) forecast holiday sales, including e-commerce and non-store sales, to rise between 6% and 8% to between $942.6 billion and $960.4 billion during November and December.

Part of the slowdown in the last two months of the year also stem from consumers starting their holiday shopping as early as October, taking advantage of steep discounts offered by retailers to clear out excess inventory.

Companies like Target Corp (NYSE:) and Walmart (NYSE:) Inc have been sitting on mountains of inventory, forcing them to give out early discounts and taking the shine off of major shopping days.

“While (early discounts) may result in some sales being pulled forward, we expect to see continued deals and promotions throughout the remaining months,” NRF Chief Economist Jack Kleinhenz said.

Despite a weaker outlook, NRF added that consumers remain resilient.

“In the face of these challenges, many households will supplement spending with savings and credit to provide a cushion and result in a positive holiday season,” President and Chief Executive Matthew Shay said.

Share
Facebook
Twitter
Pinterest
WhatsApp
Previous article
I fell through my rotten stairs while carrying my baby… I complained to my landlord but they said it was tough luck
Next article
Fortinet Tumbles on Worse Than Expected Q4 Billings Guidance By Investing.com
RELATED ARTICLES
Market