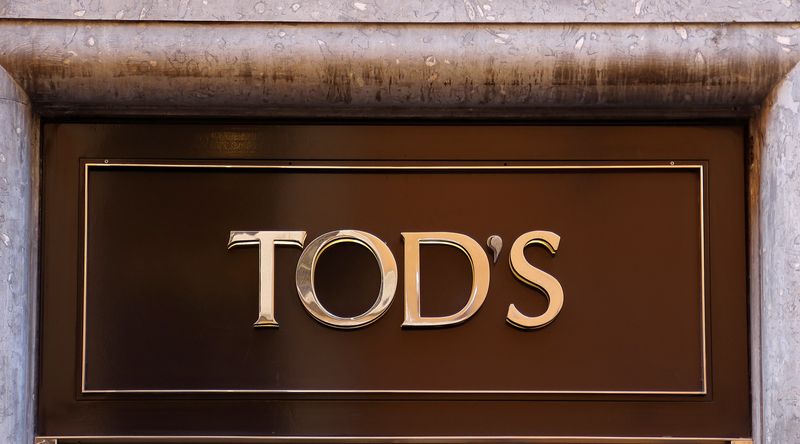 © Reuters. FILE PHOTO: The logo of Tod’s is seen in a shop in downtown Rome, Italy February 10, 2016. REUTERS/Tony Gentile/File Photo

MILAN (Reuters) -Sales at Italian fashion group Tod’s rose by a bigger-than-expected 16.4% in the first nine months of the year, as the founding Della Valle family weighs whether to push ahead with a proposed de-listing of the group.

An attempt by the Della Valle brothers to buy out other shareholders in Tod’s failed last month when their takeover offer fell short of the targeted 90% ownership threshold.

Chief Financial Officer Emilio Macellari said the Della Valles were still considering whether to proceed with the de-listing by merging Tod’s into the family’s holding company – a possibility envisaged in the offer’s investor document.

“I imagine a decision will be made before the end of the year,” Macellari told analysts, adding the family wanted to keep a friendly attitude towards the market.

The merger of Tod’s into the family’s corporate vehicle would leave minority shareholders with illiquid holdings in an unlisted entity.

Revenues at Tod’s totalled 724.9 million euros ($738 million) in the period, surpassing a 716 million euro forecast in an analyst consensus cited by Intesa Sanpaolo (OTC:) research, thanks to tourist flows and local demand in Europe and Italy.

The de-listing was the Della Valles’ latest attempt at revamping a group that built its name on craftsmanship but has struggled, like other Italian names, to appeal to younger shoppers in recent years.

“We are confident that we will be able to achieve good results also for the future,” Chairman and CEO Diego Della Valle said in a statement citing orders coming in for the spring/summer collection.

My dad played in the Super Bowl. Then football claimed his life.