Tesla Shanghai adds to inventory at highest rate ever in October 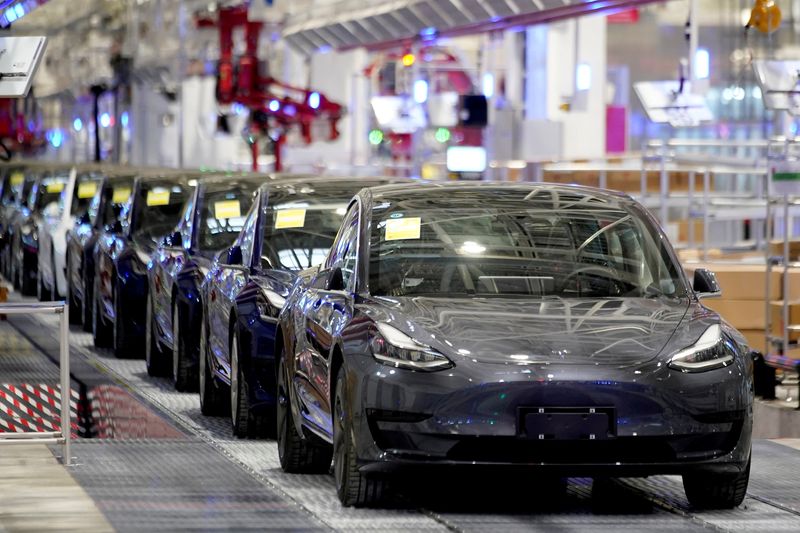 SHANGHAI (Reuters) – Tesla (NASDAQ:) added to its electric vehicle inventory in Shanghai at its fastest pace ever in October, brokerage data showed, at a time when automakers and investors are bracing for a downturn in the world’s largest car market.

In October, Tesla produced 87,706 Model 3s and Model Ys in Shanghai but delivered 71,704 vehicles, leaving a gap of 16,002 China-made cars in inventory, according to data from China Merchants Bank International (CMBI).

That was the biggest gap between production and sales since Tesla opened its Shanghai Gigfactory in late 2019, CMBI data showed.

Tesla did not immediately respond to a request for comment.

While Tesla’s inventory numbers remain low relative to established automakers, building inventory has been a down-cycle indicator for the industry, forcing markdowns in past recessions of the kind Tesla has not yet faced.

Tesla Chief Executive Elon Musk said last month China, Tesla’s second largest market, was in a “recession of sorts”. The International Monetary Fund expects China to grow just 3.2%this year, down from 8.1% last year, and automakers are bracing for Beijing to roll back subsidies on EVs and hybrids.

Tesla cut prices for its Model 3 and Model Y cars in China last month to boost sales. On Monday, the company offered an additional rebate for buyers who take delivery this month and buy insurance from one of Tesla’s partners.

Hong Kong-based CMBI has been bearish about the outlook for China’s auto market, saying in a note last month that it expects a slowdown in retail demand in 2023 and citing a growing inventory of unsold cars as a concern.

Unlike traditional automakers, Tesla distributes through its own stores, rather than dealers, and so is left to hold and finance any inventory that has not been delivered to buyers.

Tesla’s pattern has been to produce more vehicles at the beginning of a quarter and to focus on deliveries in the closing weeks, a practice Musk has said the company is working to change by better pacing deliveries.

Some analysts have said Tesla will need to carry more vehicles in inventory as a buffer to smooth delivery over the course of a quarter. The company reported $2 billion in inventory at the end of the third quarter, including unsold cars. That was up 60% from $1.2 billion a quarter earlier.

Tesla has also been reshaping its retail strategy for China. Last week, Tesla closed its first showroom in China, a high-end location in a Beijing mall. Tesla has been considering closing showrooms in flashy malls and opening larger ones in less-costly suburban locations that can also provide repairs.

That reflects a shift in priority for Tesla’s China team from ramping up output at the Shanghai Gigafactory to focusing on its sales strategy, one person with knowledge of the discussions said.

Tesla managed to keep the Shanghai plant running during most of the city’s COVID-19 lockdown and completed an upgrade over the summer that expanded its capacity to 22,000 units per week, Reuters reported previously.