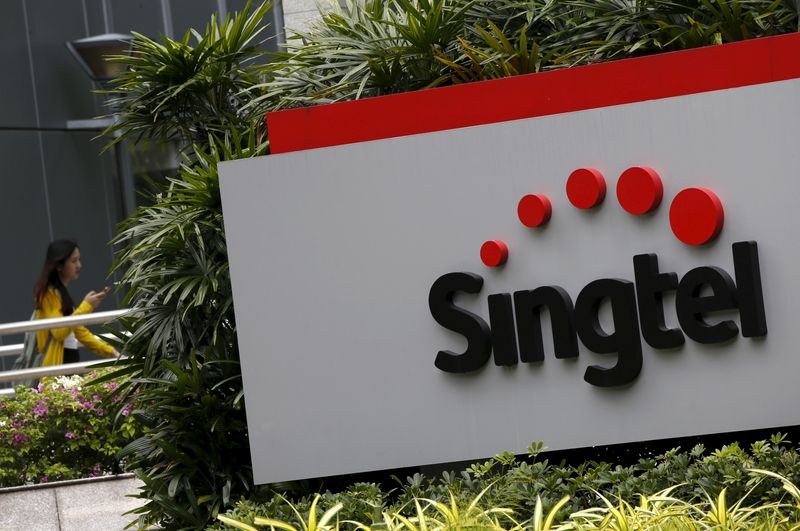 © Reuters. FILE PHOTO: A woman using a mobile phone walks behind a Singtel signage at their head office in Singapore February 11, 2016. REUTERS/Edgar Su

(Reuters) -Singapore Telecommunications (SingTel) on Thursday posted a 23% jump in first-half net profit due to a strong turnaround in partly-owned Bharti Airtel and an exceptional gain from the partial divestment of its stake in Airtel.

Southeast Asia’s largest telecom firm in late August announced the sale of a 3.3% stake in Airtel to India’s Bharti Telecom Ltd, which resulted in a net gain on disposal of S$1.01 billion ($720.25 million).

Even amid inflationary pressures, telecommunication firms tend to do well due to strong demand for services such as voice and data, with the subscription model ensuring a steady flow of revenue.

SingTel, which is going through a strategic reset, said net profit for the half year ended Sept. 30 was S$1.17 billion, compared with S$954 million a year earlier.

Commenting on the company’s robust earnings Chief Executive Yuen Kuan Moon said, “This was due to Airtel’s standout performance in India as it grew ARPU through higher usage and tariff hikes.”

Optus, the Australian unit of SingTel, flagged a massive data breach where an investigation found that up to 10 million customers data including their personal details were compromised.

SingTel said a provision of A$140 million ($89.99 million) has been made and recorded for Optus as an exceptional expense for a programme of customer actions.

The provisions over the data breach include an external independent review, third-party credit monitoring services and the replacement of identification documents where needed, SingTel added.

Man stole IDs of murder-suicide victims and looted their estate

Super Bowl 57: Date, time, location, how to watch in Australia, betting odds for Eagles vs Chiefs

Super Bowl 57: Date, time, location, how to watch in Australia, betting odds for Eagles vs Chiefs

Man stole IDs of murder-suicide victims and looted their estate