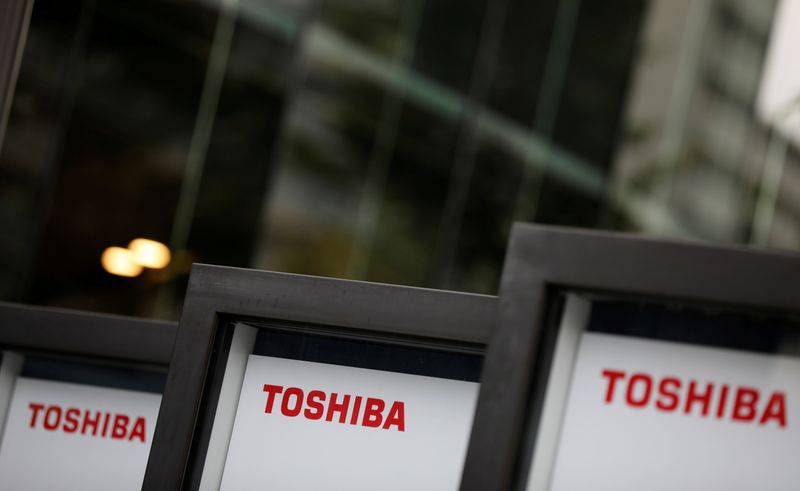 © Reuters. FILE PHOTO: Logos of Toshiba are pictured at a venue of Toshiba Corp’s annual general meeting with its shareholders in Tokyo, Japan, June 25, 2021. REUTERS/Kim Kyung-Hoon

By Kantaro Komiya and Makiko Yamazaki

JIP’s proposal, which includes more than ten investors including utility Chubu Electric Power Co Inc and financial services group Orix (NYSE:) Corp, appears not to have obtained commitment letters from banks, the report said, adding the fund was aiming to pull together financing by the end of this month if Toshiba accepted the bid.

Reuters previously reported that JIP’s plan to allow Toshiba’s current management to stay on after a buyout had raised alarm among some of Japan’s big banks, whose funding is seen as critical to financing the deal.

JIP, Chubu Electric and Orix will each invest 100 billion yen, the paper said, without saying where it got the information. A number of overseas funds opted not to join the bid due to expectations for low returns, it said.

A Toshiba representative declined to comment, saying the company could not “answer information about candidates, including co-investors, as it may undermine fair process”.

JIP was previously selected by Toshiba as the preferred bidder and was widely expected not to deliver a firm proposal with banks’ commitments in time for Monday’s deadline.

The outcome of any deal could have far-reaching implications for Toshiba’s 116,000 employees and for national security, given that the chips-to-nuclear conglomerate also makes defence equipment.

Once a giant of Japanese manufacturing, Toshiba has lurched from crisis to crisis since a 2015 accounting scandal. It has been weakened by years of discord between management and major shareholders, many of them foreign activists seen as keen for a buyout.