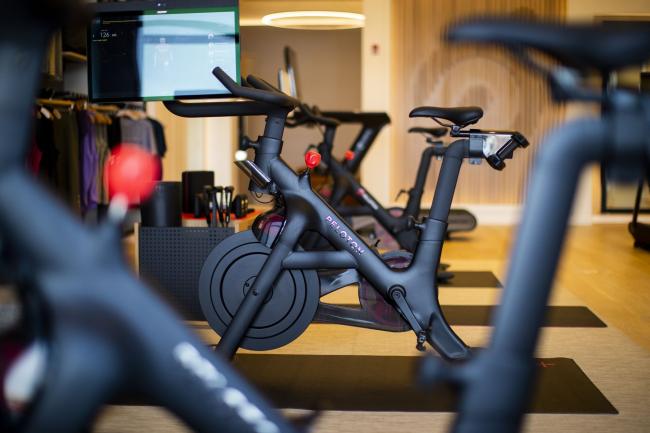 &copy Bloomberg. A Peloton stationary bike for sale at the company’s showroom in Dedham, Massachusetts, U.S., on Wednesday, Feb. 3, 2021. Peloton Interactive Inc. is scheduled to release earnings figures on February 4.

(Bloomberg) — Alphabet’s earnings misses, and disappointing forecasts last week from Amazon (NASDAQ:) and Meta Platforms (NASDAQ:) exposed tech giants’ vulnerability to a slowing economy. Defying the tech rout to trounce its peers, Apple’s (NASDAQ:) better-than-expected earnings gave the shares their best 1-day move in more than two years, even as the iPhone maker plans to trim production in a move that could hurt suppliers like Qualcomm (NASDAQ:), due to report its own results this week. Meanwhile, Exxon (NYSE:) closed at a record high and Chevron (NYSE:) touched intraday highs after smashing analysts’ expectations in what could be one of the biggest profit hauls for Big Oil.

Despite the bright spots, overall corporate earnings are on a bleaker trajectory than last quarter, based on the number of negative surprises so far this season. Of the 40% of companies that have posted results, only 73% have beaten earnings estimates, compared with 75% at this point in the second-quarter reporting season. Bottom-line misses also rose to 22% from 20% a quarter ago. CVS Health’s (NYSE:) full-year guidance update this week will put healthcare companies’ resilience to test, while Pfizer (NYSE:) will shed light on Covid-related revenues as the pandemic recedes.

On Wednesday, earnings could be overshadowed by the Federal Reserve, expected by the vast majority of surveyed economists to raise rates by 75 basis points for a fourth consecutive meeting, a case supported by latest core inflation readings, with uncertainty looming around the pace of future hikes required to tame widespread price pressures.

Brazilians voted yesterday to elect Luiz Inacio Lula da Silva as president over incumbent Jair Bolsonaro in what could signal a change of direction for Latin America’s largest economy. Petroleo Brasileiro, the government-controlled oil giant, is slumping in early US and European trading as the election results could hurt privatization plans intended by the outgoing administration.

Earnings highlights to look for this week:

Monday: Stryker (NYSE: US) is due after the closing bell. The maker of medical and surgical equipments is projected to see single-digit gains on both the top and bottom lines, compared with the prior year. Johnson & Johnson’s (JNJ US) recovery in orthopedic procedures seen in its earnings report two weeks ago bodes well for Stryker, BTIG analysts wrote. Management also reassured investors of its confidence to deliver on the raised full-year organic growth target of 8%-9%, Wells Fargo analysts said in September, adding that Stryker was “incrementally less pessimistic” about the macro environment.

Tuesday: Pfizer Inc (NYSE:) is due premarket following recent upbeat news on pricing for its Covid shot. Nonetheless, Wall Street analysts are bracing for a weak report driven by lower vaccine revenue for the third quarter. BMO analysts noted that delayed shipments of doses to the EU will likely drag down Comirnaty segment revenue, which is estimated to fall to the lowest level since first deliveries in late-2020. On the earnings call, the drug maker could face questions over the booster uptake, Paxlovid use and implications of the US government’s plan to shift to a private-market model next year, Bloomberg Intelligence said.

Uber (NYSE: US), holding its earnings call at 8 a.m., is contending with challenges from California and the Biden Administration over how the gig company classifies its workers. A recent San Francisco Superior Court ruling and plans from the White House could raise risks the company would face in potentially reclassifying its drivers as employees and impact the company’s revenue, cost of revenue, incentives and promotions. To read more, see the ESG Stock Watch.

Wednesday: CVS Health will post third-quarter results before the market open. BofA and Cowen analysts are once again expecting a “solid” and “steady” report, underscoring the drugstore operator’s consistent earnings beats over the last 26 quarters. That said, the company’s 2023 and 2024 outlooks will be key, as investors seek clarity on financial implications of the drop in US government’s Medicare Advantage star ratings. Management can expect to address Centene’s drug benefits contract to Cigna (NYSE:), as well as its M&A strategy, considering reports on its interest in Cano Health and the announcement to buy Signify Health, according to Bloomberg Intelligence.

Qualcomm (NASDAQ:) is due after the close. The chipmaker is likely to get caught in the onslaught of tech misses seen in the past week as Apple, which accounts for 22% of Qualcomm’s revenue, moves to cut iPhone production and as the White House curbs chip technology exports to China. Adjusted revenue for the fiscal fourth quarter is projected to grow at the slowest pace in two years, according to Bloomberg consensus. BI even floated the possibility of a miss due to Qualcomm’s elevated smartphone exposure, clouding the upcoming outlook for the fiscal first quarter.

Thursday: Peloton (NASDAQ: US) will deliver fiscal first-quarter results before market. Consensus estimates point to the third straight quarter of year-over-year revenue decline, a sign that the fitness technology company is not yet out of the woods despite its repeated turnaround efforts to cut costs and jobs. Demand has been slow to recover as customers began returning to offices and gyms. Cash burn will also be a focus as analysts assess whether it can turn cash flow neutral in fiscal 2023 after burning through $2.4 billion in cash in fiscal 2022.

Cryptocurrency-exposed companies Coinbase (NASDAQ: US) and Block (SQ US) are expected to deliver y/y EPS declines when they report after-market as the crypto winter persists with trading around the $20,000 mark since mid-September. Coinbase is expected to post a third consecutive quarter of sequential declines in revenue and monthly transacting users. Its ability to control costs and cash burn will be key to the near-term outlook, BI said, adding that maintaining 2022 guidance for an adjusted Ebitda loss of $500 million will be important for potential future investments. For digital payments firm Block, analysts at Wells Fargo (NYSE:) lowered their estimates for gross profit after observing a decline in Cash App and Square user numbers, as well as weaker consumer spending on the heels of major bank earnings.

Friday: Hershey (NYSE:) is due before market. The confectionery maker is expected to post double-digit revenue growth for a third quarter, according to consensus estimates. Unlike many companies whose earnings have been affected by a strong dollar, it faces minimal currency risk as it is not exposed to macro headwinds in the UK and Europe, according to Piper Sandler analysts, whose model ranks the stock at the top spot. Consumer surveys by the research firm shows that consumers continue to cite candy as “one of the least likely categories for trading down,” giving the snack company strong pricing power in a slowing economy.

Share
Facebook
Twitter
Pinterest
WhatsApp
Previous article
Australian house prices fall again in October, but no reason for homeowners to panic
Next article
Brixton shooting: Innocent Deliveroo driver was on last delivery when he was caught in the cross fire of ‘gang battle’
RELATED ARTICLES
Market