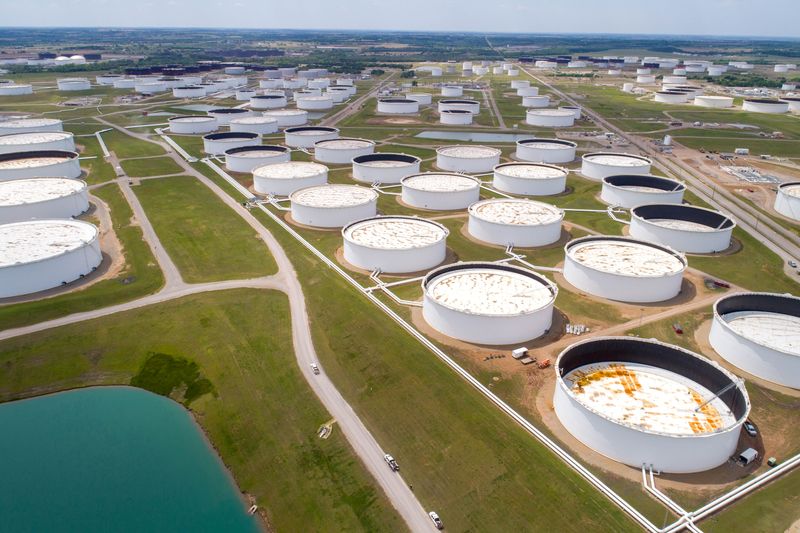 SINGAPORE (Reuters) -Oil prices rose more than 1% on Tuesday, paring losses from the previous session, as a weaker U.S. dollar offset widening COVID-19 curbs in China that have stoked fears of slowing fuel demand in the world’s second-largest oil consumer.

The Brent and WTI benchmarks both ended October higher, posting their first monthly gains since May, after the Organization of the Petroleum Exporting Countries and allies including Russia said they would cut output by 2 million barrels per day (bpd).

The greenback sank on Tuesday from a one-week high against a basket of major peers, as traders weighed the odds of a less aggressive Federal Reserve at Wednesday’s monetary policy meeting.

A weaker dollar makes oil cheaper for holders of other currencies and usually reflects greater investor appetite for risk.

OPEC raised its forecasts for world oil demand in the medium-and longer-term on Monday, saying that $12.1 trillion of investment is needed to meet this demand despite the transition to renewable energy sources.

COVID-19 curbs in China forced the temporary closure of Disney’s Shanghai resort on Monday and have spurred worries of lower fuel demand in the world’s top crude oil importer as it persists with its zero-COVID policy.

Strict pandemic restrictions have caused China’s factory activity to fall in October and cut into its imports from Japan and South Korea.

Stephen Innes, managing partner at SPI Asset Management said that “the market has digested the latest string of China lockdowns”.

“The further we move into November, the closer we get to the EU-Russian oil embargo taking effect, which will have a material impact on Russia’s supply and by extension global supply,” Innes said.

Keeping a check on oil prices, though, U.S. oil output climbed to nearly 12 million bpd in August, the highest since the start of the COVID-19 pandemic, even as shale companies said they do not expect production to accelerate in coming months.

That is likely to lead to a rise in oil stocks in the week to Oct. 28 of about 300,000 barrels, a preliminary Reuters poll showed, while distillate and gasoline inventories were expected to fall.

The poll was conducted ahead of reports from the American Petroleum Institute due at 4:30 p.m. EDT (2030 GMT) on Tuesday, and the Energy Information Administration due at 10:30 a.m. (1430 GMT) on Wednesday.