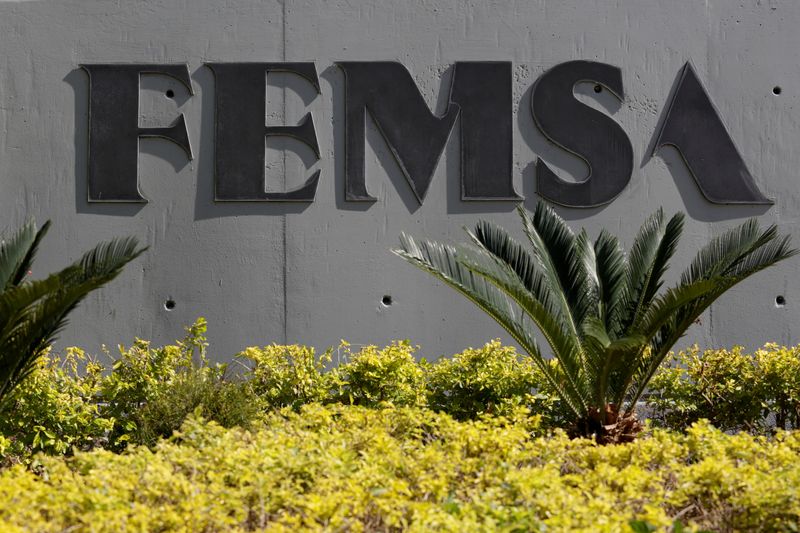 © Reuters. FILE PHOTO: The logo of Coca Cola Femsa, the largest Coke bottler in the world, is pictured at its headquarters in Monterrey, Mexico April 25, 2017. REUTERS/Daniel Becerril/File Photo

MEXICO CITY (Reuters) – Mexican bottler and retailer FEMSA is banking on an expansion of Swiss kiosk operator Valora in upcoming quarters as well as a business-to-business service through its financial technology arm, executives said Monday.

“We do not expect this to be altogether a major strain on the FEMSA funding structure,” Camacho said, adding that if necessary FEMSA would fund the expansion from the firm’s other operations.

FEMSA is not planning to expand to other geographies for the time being, Camacho said.

Executives said FEMSA would also push a business-to-business service through its financial technology arm, though they did not say how much they would invest into it, nor whether it would operate under the same name as its consumer fintech service, Spin by Oxxo.

FEMSA “will have news on that very soon,” Camacho said.

Spin, run by the Oxxo convenience store chain ubiquitous throughout Mexico, was granted a “fintech license” by regulators earlier this month, and has quickly gained a foothold in a country where many people do not have bank accounts.

FEMSA ruled out seeking a banking license for the service for the time being, though Carrion said it was seeking permits to allow larger deposits and direct deposit payments from employers.

With the fintech license, FEMSA “can learn a lot about the use cases” for Spin and whether the service will be worthwhile for the company, Camacho said, adding the company could decide to request a banking license at a later date.