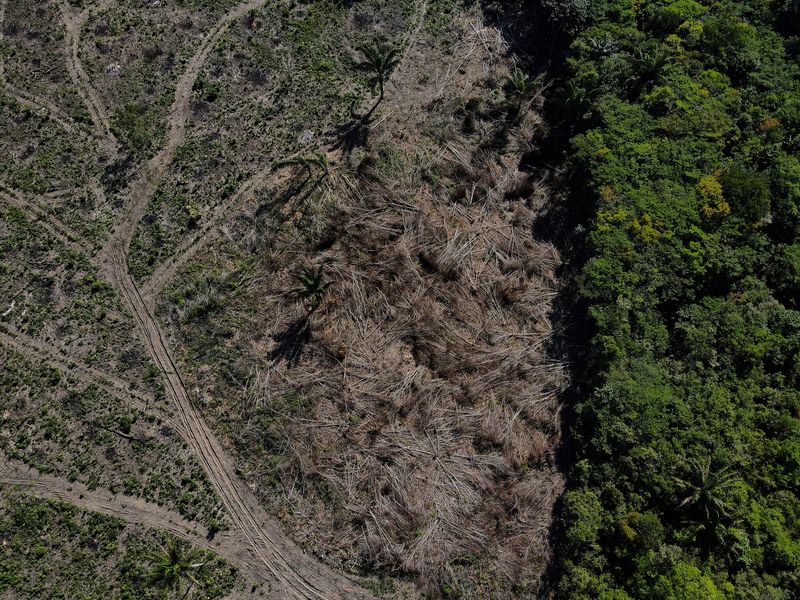 By Jake Spring and Simon Jessop

SHARM EL-SHEIKH, Egypt (Reuters) – The world’s largest food trading companies detailed a plan on Monday to eliminate deforestation from their supply chains for soy, beef and palm oil by 2025, a step seen as essential to averting catastrophic climate change.

Destruction of forests – like the Amazon (NASDAQ:) rainforest to make way for farm fields and ranches or Indonesian jungle for palm oil – emits huge amounts of greenhouse gas each year, helping to drive climate change.

The firms said the plan helps put the world on track to limit global warming to an increase of 1.5°C above pre-industrial levels, the threshold beyond which scientists say climate change risks spinning out of control.

The roadmap “represents a significant sector milestone in eliminating commodity-driven deforestation in line with a 1.5°C pathway,” COFCO International CEO Wei Dong said in a statement.

Many of the firms had previously committed to eliminating deforestation by 2025, with the plan establishing milestones along the way that vary slightly by sector.

The environmental advocacy group Mighty Earth CEO Glenn Hurowitz said that 2025 was not soon enough, calling for all deforestation to be ended immediately.

“The roadmap’s insistence that individual companies undertake best efforts to establish individual cut-off dates for deforestation no later than 2025 means the bulldozers will keep running and the destruction will continue,” he said in a statement.

The industry has a spotty record of meeting past deforestation commitments.

In 2010, hundreds of the world’s largest consumer brands as part of the Consumer Goods Forum pledged to reach “net zero” deforestation by 2020. But as the deadline approached, Cargill said that the food industry would fail to meet the goal.

The plan also calls on firms to establish targets for reducing their greenhouse gas emissions and to begin disclosing their emissions from land use change in 2024.

FACTBOX-COP27 Major players at the U.N. climate talks in Egypt

For daily comprehensive coverage on COP27 in your inbox, sign up for the Reuters Sustainable Switch (NYSE:) newsletter here