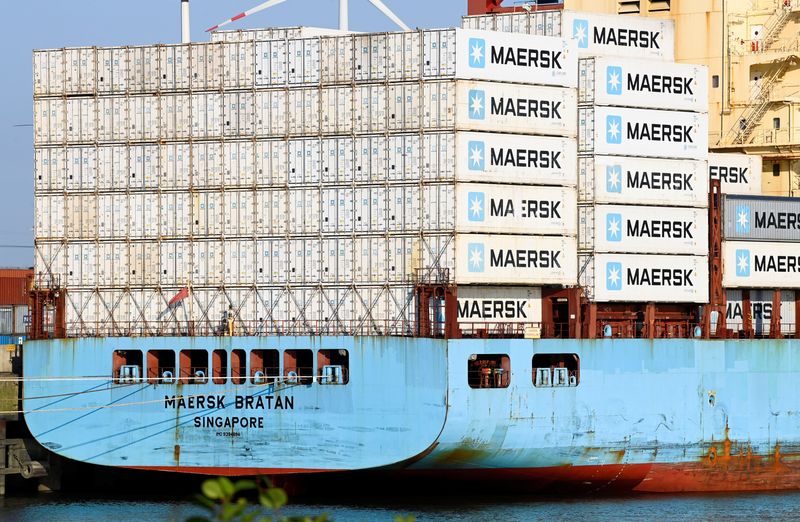 © Reuters. FILE PHOTO: The cargo ship “Maersk Bratan” of the Danish shipping company Maersk is loaded at a container terminal in the harbour in Hamburg, Germany, June 24, 2022. REUTERS/Fabian Bimmer

OSLO (Reuters) -Shipping group Maersk reported third-quarter earnings above expectations on Wednesday but lowered its outlook for the growth of global container demand this year amid concerns about the overall health of the global economy.

Underlying earnings before interest, taxation, depreciation and amortisation (EBITDA) rose to $10.86 billion from $6.94 billion a year ago, above the 9.78 billion forecast by analysts in a poll gathered by the company.

Maersk said it had cut its outlook for global container demand, now seeing it down by 2% to 4% this year compared to the previous guidance of it being the lower end of a range between minus 1% and plus 1%.

It cited an unfolding economic slowdown, expected to continue into the coming year as the reason for its cut guidance.

The Copenhagen-based company, one of the world’s biggest container shippers with a market share of around 17%, is often seen as a barometer for global trade.

The company repeated it expects underlying EBITDA of around $37 billion this year.