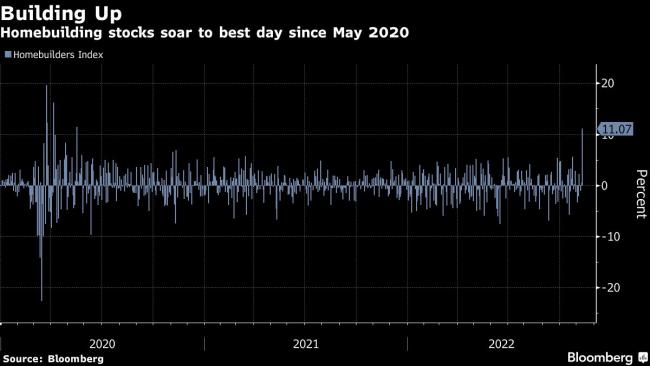 (Bloomberg) — D.R. Horton Inc., Lennar Corp (NYSE:). and other homebuilder companies’ shares are staging the biggest rally in more than two years as a slowdown in the pace of inflation fueled bets that the Federal Reserve will start dialing back the pace of its interest-rate hikes.

The S&P Supercomposite Homebuilding Index surged as much as 12%, the most intraday since May 2020, after a smaller-than-expected rise in consumer prices last month ramped up hopes that the central bank’s aggressive monetary policy tightening is reining in inflation. That sent Treasury yields tumbling, promising to pull mortgage rates back from the steep jump that’s weighed on the real estate industry.

Two of the largest builders in the US, Lennar and D.R. Horton, are both seeing the biggest one-day gain since early 2020, rising as much as 13% and 12%, respectively. Other gainers include Century Communities (NYSE:) Inc., which is up as much as 16%, and KB Home (NYSE:), rising by 14%.

Homebuilders’ stocks have been slammed this year by a surge in mortgage rates, as the increased borrowing costs have eroded the affordability of their products and consumers’ demand. Mortgage rates data from Freddie Mac (OTC:) on Thursday morning showed the 30-year rate above 7%.

Even after the gains, the S&P homebuilder index is still down about 27% this year.