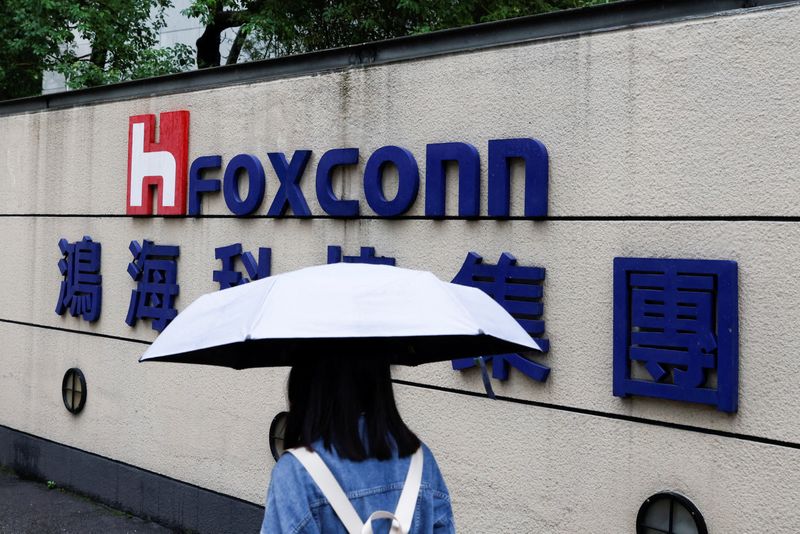 © Reuters. FILE PHOTO: A woman carrying an umbrella walks past the logo of Foxconn outside a company’s building in Taipei, Taiwan October 31, 2022. REUTERS/Carlos Garcia Rawlins

TAIPEI (Reuters) – Foxconn-led electric vehicle consortium MIH announced plans on Tuesday for its first car, a boxy single row three-seater which it hopes will be popular with one-child families in Asia.

Betting on strong demand in Asian markets for smaller electric cars, MIH Consortium plans to build its first car, which it calls Project X, in 2023 and start mass production the following year, though no customers have been confirmed, the company said.

“We need to do something differently to disrupt the industry,” Jack Cheng, chief executive of MIH, said at an event in Taipei to unveil the EV which will be custom built for the purchaser.

“Build your own vehicle with Project X,” Cheng said, referring to the car’s modular design. “It’s like Lego. I can put (a module) on and take it off easily,” Cheng said.

Foxconn, the main supplier of Apple (NASDAQ:)’s iPhones, eventually wants to replicate its level of success in assembling personal computers and cellphones as it expands into building EVs.

MIH is eyeing not only Taiwan, but also India, Thailand, Indonesia and Japan as prospective markets for the three-seater.

“The American market tends towards large cars,” Cheng told reporters, adding that this model would suit a single-child family.

“As long it is a place where our partners, including Foxconn, have manufacturing sites, then there is a possibility to mass produce there,” Cheng said.

Cheng said many MIH partners are willing to initially take risks and bear development costs, because they are optimistic about EV sales taking off.

“The more cars we make, the more they will earn,” Cheng said.

MIH Consortium, which includes auto chipmaker NXP (NASDAQ:) and navigation and digital mapping company TomTom among other members, said it plans to build a demo car for a six-seater in 2024, followed by a nine-seater.

Shortly before the MIH event began, Foxconn announced a deal to take a near-20% stake in loss-making U.S. electric truck maker Lordstown Motors Corp for up to $170 million.