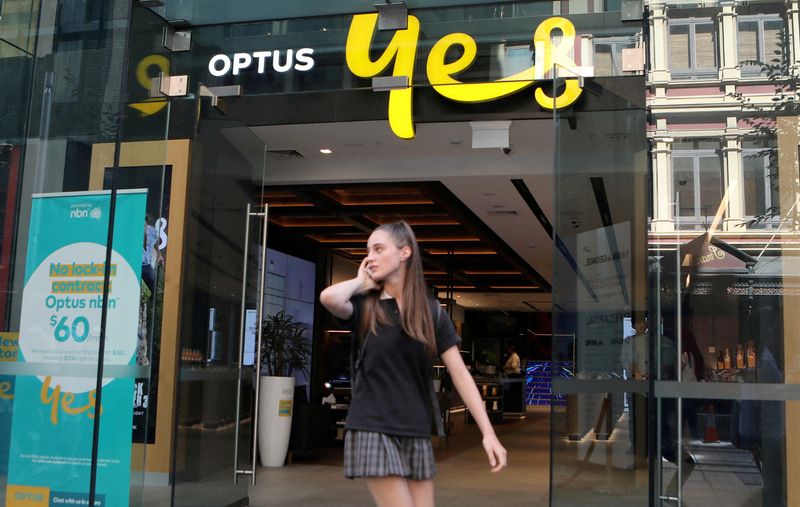 © Reuters. FILE PHOTO: A woman uses her mobile phone as she walks past in front of an Optus shop in Sydney, Australia, February 8, 2018. REUTERS/Daniel Munoz

Here is a list of companies that have been hit by data breaches so far this year:

Australia’s second-largest mobile operator and a unit of Singapore Telecommunications was the first to report a data breach that affected up to 10 million customers, about 40% of the nation’s population. The data exposed included home addresses, drivers’ licences and passport numbers.

Health insurer Medibank Private, which covers about one-sixth of Australians, said personal and significant amounts of health claims data of around 9.7 million of its current and former customers was compromised, forcing it to flag a hit to earnings and withdraw forecast for a key metric.

Australian Clinical Labs Ltd, one of the country’s largest pathology providers, said unit Medlab suffered a breach that exposed data of about 223,000 patients.

Australia’s largest telecoms operator Telstra (OTC:) suffered what it called a small data breach, which exposed data of about 30,000 current and former employees dating back to 2017.

IT services consulting firm Dailog, another unit of Singapore Telecommunications, said it faced a cyber attack that potentially affected 1,000 current and former employees and fewer than 20 clients.

Australia’s Assistant Minister For Defence Matt Thistlethwaite said hackers targeted a communications platform used by the country’s military personnel and defence staff with a ransomware attack but that no data was compromised.

Skin and hair care products maker BWX Limited said a malicious code was “unlawfully” entered onto one of its websites that may have compromised credit card numbers and expiry dates of about 2,500 customers.

Simon Middleton to step down as England head coach

Simon Middleton to step down as England head coach