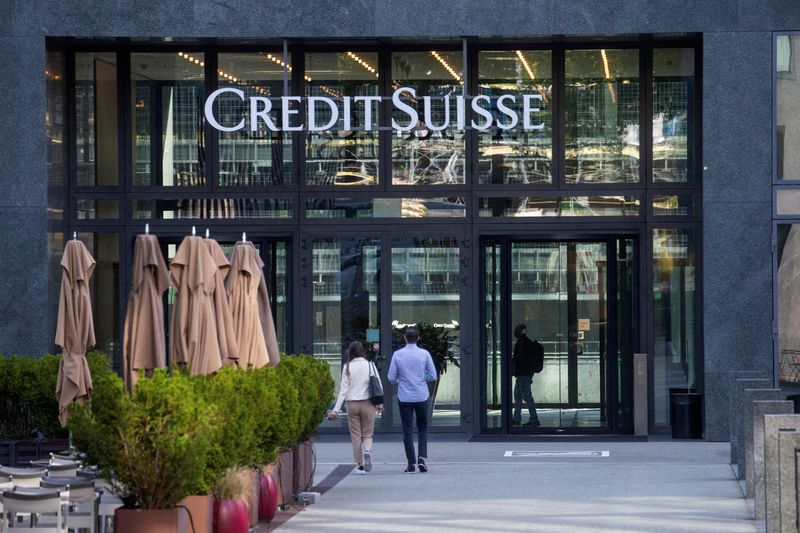 LONDON/ZURICH (Reuters) – Credit Suisse’s recent decision to exit certain investment banking activities is drawing scrutiny from at least two investors and a proxy adviser who told Reuters they are worried about how the Swiss bank managed potential conflicts of interest of two directors.

The move to break up the lender and spin off the investment banking business was seen by analysts as a way for Credit Suisse to focus on its more profitable wealth management franchise. But the investors are questioning how some of the decisions were taken.

Board member Michael Klein had begun working on the turnaround with Chairman Axel Lehmann and other Credit Suisse officials in early February, according to a person familiar with the situation.

In late October, Klein stepped down from the board to work on the division that will be spun off and rebranded CS First Boston. He is set to become CEO of the unit in 2023, pending regulatory approvals. The company will be a preferred long-term partner for Credit Suisse, the bank has said.

Ethos Foundation, which represents Swiss pension funds that own more than 3% of Credit Suisse, told Reuters the bank needs to show it conducted a thorough search when it picked board member Klein to run the investment bank unit.

“We wonder whether the board conducted an adequate recruiting process” for the investment bank chief, Ethos CEO Vincent Kaufmann said by email on Monday.

In addition, Roger Said of proxy adviser Actares, which works for individual investors including Credit Suisse shareholders, told Reuters there is the risk that both Klein and Blythe Masters, another bank board member who also advised on the reorganization, “could profit at Credit Suisse’s expense.”

Klein recused himself from board discussions and voting after he was informally offered the CEO job on Oct. 21, just six days before the reorganization was announced, said the source familiar with the situation.

Credit Suisse declined to comment beyond Lehmann’s remarks Oct. 27 when the bank unveiled the restructuring. “It goes without saying (we are) very, very mindful of conflict of interest,” Lehmann said then in relation to both Klein and Masters.

Since 2021, Masters has also served as a consultant to Apollo, the U.S. buyout fund which Credit Suisse picked as the preferred buyer of one of the bank’s trading businesses. Apollo has invested in Motive, a New-York-based investment company founded by Masters.

Spokespeople for Klein, Masters and Apollo declined to comment.

At issue is whether Klein and Masters – both members of the board’s committee on the bank’s strategic overhaul – may have influenced the decisions to favour their own interests.

“In both cases, there is the possibility of conflicts of interest,” Actares managing director Said told Reuters by email.

“The bank must show how it deals with this risk and communicate transparently,” even if the two board members have abstained from voting on the reorganization, he said.

In Lehmann’s October remarks, he said the two directors “needed to abstain from any voting and were only allowed to potentially contribute from a more technical perspective, so helping to create the fact base for a decision making. This is all very well documented.”

Tapping the expertise of internal talent is not unusual among companies in Europe, according to Luca Enriques, a professor of corporate law at the University of Oxford. Companies in Europe tend to accept that the board may benefit from having a conflicted director participate in the discussion, Enriques said.

Battered by a series of scandals and mounting losses, Credit Suisse last month embarked on a turnaround plan that will see the bank raise 4 billion Swiss francs ($4.16 billion) of capital from investors and cut thousands of jobs.

The investment bank spin-off and the sale of the securitized products unit to Apollo are key planks of the reorganization.

During the annual board offsite at Bad Ragaz, Switzerland, in June the plan was discussed and gained the backing of the board and management, the source said.

Klein, a 59-year-old former Citigroup (NYSE:) rainmaker who runs advisory boutique M. Klein & Co, has been a Credit Suisse board member since 2018. Over the years he became the go-to adviser to Saudi Arabia using his own boutique to help the country’s sovereign wealth fund craft deals to diversify the kingdom’s economy away from oil and gas.

To help finance its turnaround, Credit Suisse will raise money from Saudi National Bank (SNB), part owned by the kingdom, which is investing 1.5 billion Swiss francs. SNB may also invest directly in CS First Boston, the Saudi bank has said.

Klein and Credit Suisse also have discussed combining M. Klein & Co into CS First Boston, according to one source familiar with the discussions.

“There is a massive conflict of interest. In our view, this is a violation of corporate governance principles,” Thomae said.

A senior official familiar with the matter said any transaction for CS First Boston to absorb Klein’s boutique would be carried out at arm’s length and would be subject to strict regulatory scrutiny.

Deutsche Bank (ETR:) is providing an independent assessment of a potential combination, according to one person with knowledge of the discussions. Separately, the German lender is also working as an underwriter of Credit Suisse’s capital increase.

In his email, Ethos’s Kaufmann said the governance around the restructuring “should be very clean and raise no concerns of potential conflict of interest even if only ‘in appearance’. CS needs to restore trust and such doubts won’t help to address this.”

Klein’s rise to CEO of CS First Boston – a business that could have annual sales of $2.5 billion – took some bank insiders by surprise, two sources familiar with the bank’s restructuring told Reuters.

Until early October, as discussions on the reorganization became more advanced, David Miller, Credit Suisse’s investment banking and capital markets boss, was still in the running for the top job at CS First Boston, these sources said.