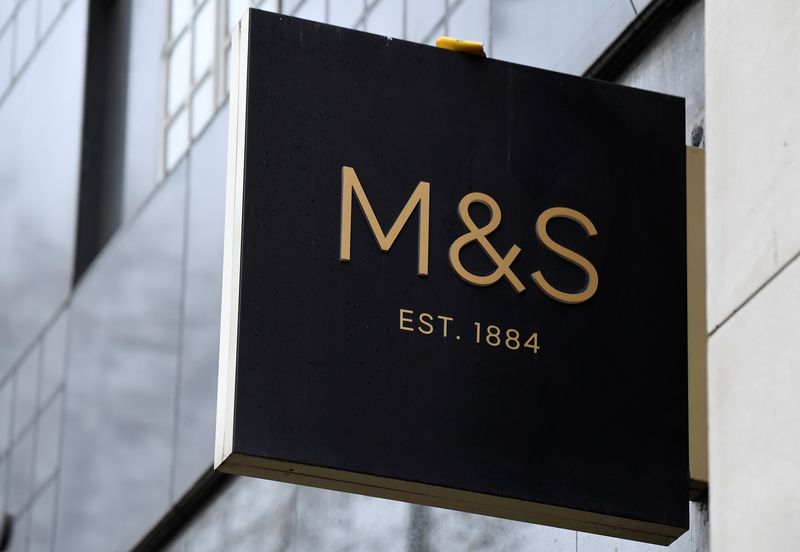 © Reuters. FILE PHOTO: A sign for Marks and Spencer (M&S) hangs outside one of their UK stores in London, Britain, December 28, 2021. REUTERS/Toby Melville/File Photo

LONDON (Reuters) – Some European retailers this week forecast or reported better full-year sales after working to keeping prices low to attract cash-strapped shoppers although others, including Marks & Spencer (OTC:) and Adidas (OTC:) warned on profit.

On Wednesday, Ahold raised its annual outlook for the third time this year, expecting low-double-digit earnings per share growth versus a prior mid-single-digit guidance.

Ahold’s sales are benefiting from a strong performance in the United States, where it operates the Stop & Shop, Giant, Food Lion and Hannaford chains. In Europe, it was helped by private label goods, its finance chief Natalie Knight said.

“It’s an opportunity for shoppers, if they need to downgrade, to do it within our stores as opposed to leaving and going to discounters,” she told Reuters.

That was driven by accelerating food inflation across markets and an easier comparative period given the impact seen last year with the floods in parts of Europe, Genelot added.

AB Foods (LON:), owner of discount fashion chain Primark, on Tuesday reported a 42% jump in 2021-22 profit. The company, which sells women’s tops for as little as 1.80 pounds each, said it will limit price increases beyond those already planned.

Europe’s largest food retailer Carrefour (EPA:) on Tuesday vowed to boost the share of private label products in its food sales to 40% in 2026 from 33% in 2022 and to accelerate expansion of discount stores in France and Brazil.

Carrefour said it would step up its expansion in e-commerce, open more discount stores and cut costs as it detailed its new turnaround strategy, .

At the end of October Carrefour raised its 2022 cash flow target as its hypermarkets benefited from “attractive” low-price offers as buyers grappled with inflation.

Having less disposable income has meant many shoppers are holding back on buying mid-market clothes and other discretionary items.

British retailer M&S, which sells clothing, home products and groceries, reiterated that 2022 profit would be lower than last year, hurt by higher costs and pressure on household budgets, as it reported a 24% decline in first-half profit.

Adidas halved its full-year net income forecast on Wednesday, blaming its split from the rapper formerly known as Kanye West ahead of the key Christmas season.

At the upper end of the market, however, luxury goods makers have been less affected by the deteriorating consumer environment reporting they are making money from their most expensive products and expect to continue to do so.

Wealthier consumers are still sitting on a cushion of savings built up during the COVID-19 pandemic and some are keen to treat themselves after two years of restrictions.