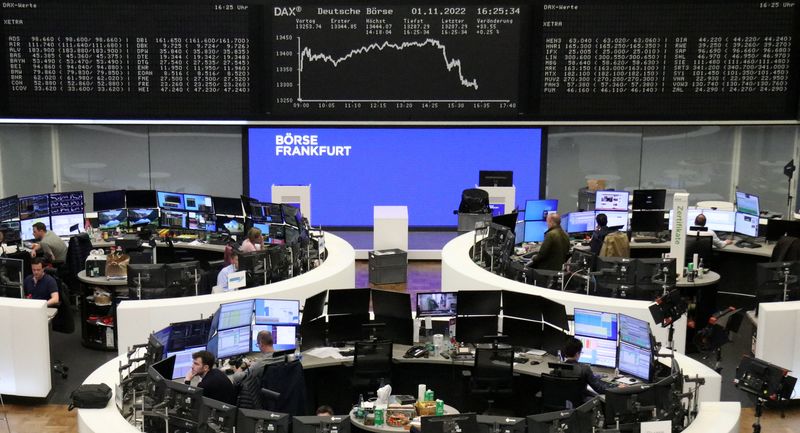 (Reuters) -European shares advanced on Wednesday as Danish drugmaker Novo Nordisk (NYSE:) led healthcare stocks higher, while investors held on to hopes that the U.S. Federal Reserve would signal a slowdown in its aggressive policy tightening cycle later in the day.

The pan-European index rose 0.3% by 0858 GMT, hovering near seven-week highs.

Novo Nordisk jumped 5.4% as it raised its full-year earnings outlook on strong sales of diabetes treatment Ozempic and reported a better-than-expected profit.

European healthcare stocks led sectoral gains with a 1.2% rise, while banks advanced 0.3% ahead of what is expected to be the Fed’s fourth straight 75-basis-point increase to interest rates. Still, attention will mostly be on whether the U.S. central bank might pivot its policy.

“The Fed is expected to bring in another super-sized rate hike of 0.75%, but that has been priced in. Instead it is the words that chair Jerome Powell chooses to use, about the economic outlook and what the future may hold, that will be in focus,” said Susannah Streeter, a senior investment and markets analyst at Hargreaves Lansdown.

“There are high hopes that he will signal that there could be some softening in the U.S. central bank’s aggressive approach to taming inflation.”

Traders are pricing in a 50-bp hike in December. Several parts of the U.S. Treasury yield curve point to a possible recession even as data continues to show a still strong U.S. economy. [FEDWATCH] [US/]

The ECB’s deposit rate is seen peaking at just below 2.9% in 2023 compared with 1.5% at present, as the central bank scrambles to fight record-high inflation in the single currency bloc.

Data showed the decline in euro zone manufacturing activity was sharper than initially estimated last month, indicating that the sector is in recession.

The European basic resources index rose 0.7% as prices of base metals gained against a weaker dollar.

Pharmaceutical stocks in the UK were also higher, with GSK up 1.1% as it trumped analyst estimates for quarterly earnings.

Maersk slid 5.1% as the Danish shipping group warned of slowing demand for transport and logistics and cut its forecast for container demand this year.

Danish hearing aid maker Demant tumbled 13.6% to the bottom of the STOXX 600, after it cut its full-year revenue and profit guidance for the second time in the year.