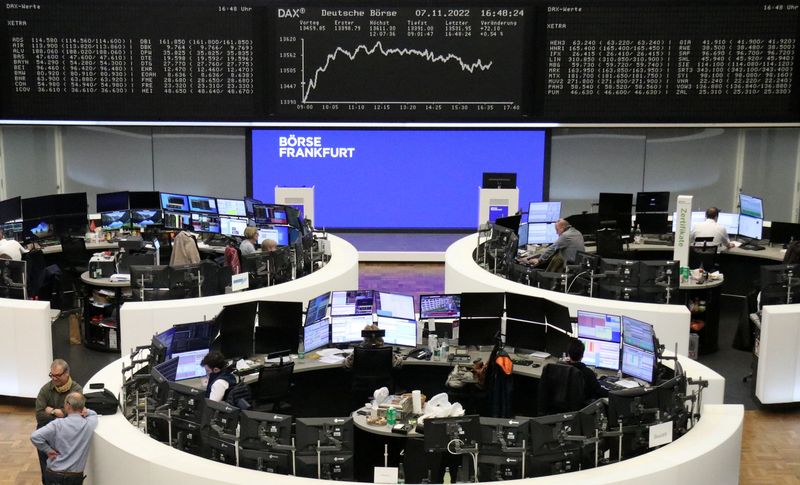 (Reuters) -European shares came off eight-week highs Wednesday as Marks & Spencer (OTC:) led declines among retailers, while investors closely tracked results from the U.S. midterm election to determine a shift in the balance of power in Washington.

Britain’s Marks & Spencer slipped 3.6%, down the most on the sector index, as it warned of a “gathering storm” of higher costs and pressure on household budgets.

As the race heats for control of U.S. Congress, markets are expecting Republican gains, a result that will likely temper Democratic spending and regulation but set up a tough fight over raising the U.S. debt ceiling next year.

A split Congress is also viewed as a more favourable outcome for financial markets. Wall Street futures were flat in early deals. [.N]

“We have our hands full with one of the most complicated markets we’ve seen in the last few years and the U.S. midterm election is now being looked at as something that will either make or break the market,” said Giuseppe Sette, president of AI investment platform Toggle in London.

Investors are also awaiting this week U.S. consumer prices data for October due on Thursday to determine if the Federal Reserve’s aggressive tightening policy has helped bring down decades-high inflation.

European stock markets eyed their fourth straight week of gains and started the month on solid ground, driven by better-than-feared corporate earnings and hopes the Fed will deliver rate hikes in smaller increments.

“The thing about valuation in European stocks is that now we are considered to be cheaper than the U.S., and because we have much lower bond yields (except for some shenanigans in the UK) we would look at this market to offer us some more value,” Sette said.

Among other stocks, Germany’s Commerzbank (ETR:) shed 5.2%, weighing down the banks index by 0.9%.

The lender said its net profit fell by 52% in the third quarter in a better-than-expected outcome, helped by higher interest rates, though it had previously flagged problems at a Polish unit weighed.

Dutch bank ABN Amro rose 1.9% as it beat analysts’ expectations, saying its net profit had more than doubled to 743 million euros ($747.98 million) in the third quarter.

German speciality chemicals maker Lanxess dropped 3.6% as it cut the top end of its forecast range for annual profit on weaker demand.