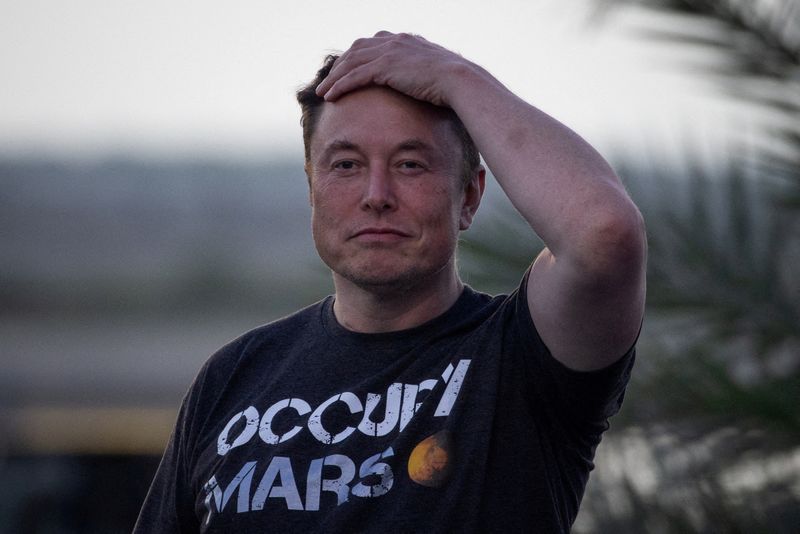 (Reuters) – Elon Musk’s net worth dropped below $200 billion on Tuesday as investors dumped Tesla (NASDAQ:) Inc shares on fears the top executive and largest shareholder of the world’s most valuable electric-vehicle maker is more preoccupied with Twitter.

Musk now has a net worth of $194.8 billion, according to Forbes, with a big share of that coming from his nearly 15% stake in Tesla, which has a market value of $622 billion.

The company has lost nearly half its market value and his net worth has dropped by $70 billion since he bid for Twitter in April.

Tesla dips as investors worry over Musk’s attention to Twitter

Investors initially fled Tesla on worries over share sale by Musk, who has divested at least $15 billion worth of stock. He closed the $44-billion deal last month with $13 billion in loans and a $33.5 billion equity commitment.

Now Wall Street fears that Musk has stretched himself too thin at a time when the EV maker is ramping up production and faces rising competition.

“It seems like Elon Musk is spending 100% of the time on Twitter and you know, it might need more capital,” said Jay Hatfield at Infrastructure Capital Management.

Since buying Twitter, Musk has made very few tweets on Tesla, a practice that helped him gain traction on the platform. He has instead used Twitter to announce plans for the social media company such as the $8 per month subscription for blue tick verification.

The net worth of the world’s richest person, who also owns rocket company SpaceX, is roughly $40 billion more than the second richest person, LVMH-owner Bernard Arnault.

Tesla shares were down 2% at $193.7 in afternoon trading, falling for a third straight session.

Australians looking to downsize their houses as cost of living bites