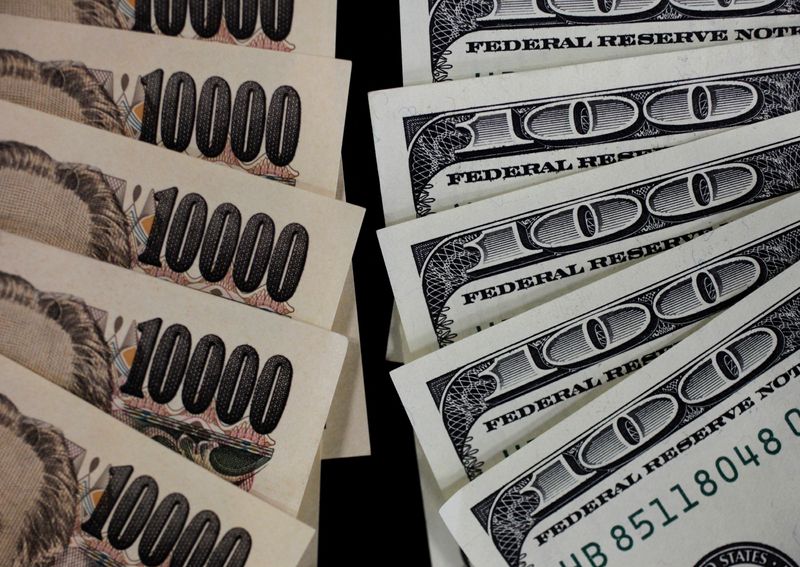 By Kevin Buckland and Harry Robertson

TOKYO/LONDON (Reuters) – The U.S. dollar sank from a one-week high against a basket of major peers on Tuesday as the mood in financial markets brightened ahead of key Federal Reserve and Bank of England (BoE) meetings this week.

The Fed is widely expected to raise its benchmark rate by 75 basis points (bps) on Wednesday, its fourth such increase in a row. But for the December meeting, futures markets are split on the odds of a 75- or 50-bps increase.

Over in Britain, the BoE is also expected to raise rates by an outsized 75 bps on Thursday before slowing back down to hike by 50 bps in December.

The – which measures the greenback against six rivals, including the euro, sterling and yen – sagged 0.48% to 111.02 on Tuesday. That ate away some of the 0.79% gains it made on Monday.

“The feeling is maybe the Fed will tone down the magnitude of hikes, but certainly the message will be the job is not yet done, inflation remains well entrenched,” said Rodrigo Catril, a currency strategist at National Australia Bank (OTC:).

“Our general sense is that the dollar probably has peaked, but that doesn’t necessarily mean it’s coming down.”

The dollar index has surged more than 15% this year as the Fed has hiked rates hard, crushing other currencies and heaping pressure on the global economy.

Investors have become highly sensitive to any signs the Fed and other major central banks could alleviate the pain by slowing down rate hikes.

However, markets were reminded that inflation remains stubbornly high in developed economies on Monday when data showed euro zone prices surged by the most on record in the year through October.

The risk-sensitive Australian and New Zealand dollars rose from one-week lows amid a broad lift in market sentiment.

The trailed however after the Reserve Bank of Australia decided to stick with a slower quarter-point pace for rate hikes despite a surprise jump in inflation to a 32-year high in the third quarter.

“It’s certainly a risk-on day and that’s being reflected in currencies, with the Aussie and the topping the leaderboard, but all within recent ranges,” Catril added.

On Monday, Japan’s finance ministry said it had spent a record $42.8 billion on currency intervention this month to prop up the yen after it dropped to 32-year lows near 152 on Oct. 21.

The fell to a near 15-year low against the dollar on Tuesday before paring its losses after the central bank fixed the official guidance rate on the weaker side of the key 7.2 per dollar level for the first time since 2008.