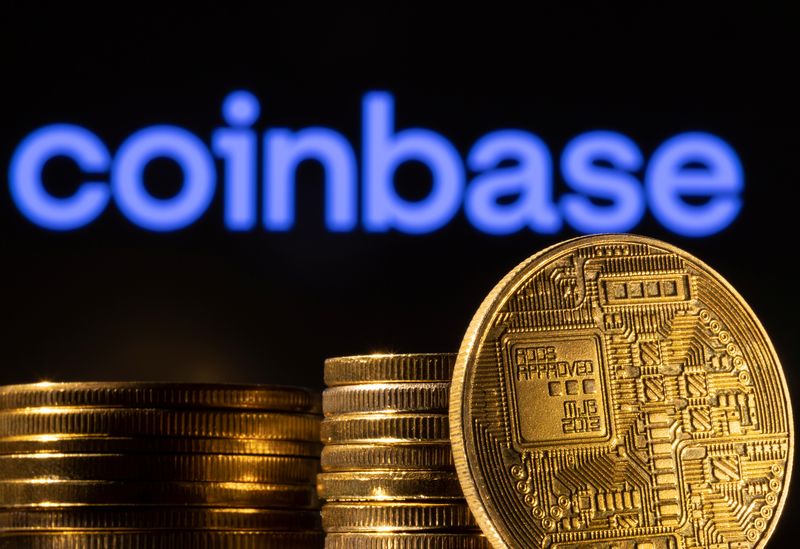 © Reuters. A representation of the cryptocurrency is seen in front of Coinbase logo in this illustration taken, March 4, 2022. REUTERS/Dado Ruvic/Illustration

“Coinbase and our customers are not in any direct danger of liquidity or credit risk,” chief financial officer Alesia Haas wrote in a blog on Tuesday.

“Regardless of whether the Binance/FTX transaction completes, we have very little exposure to FTX and we have no exposure to its token, FTT.”

FTX came into pressure when Changpeng Zhao, head of rival exchange Binance – the world’s largest – said on Sunday his firm would liquidate its holdings of the FTX token due to unspecified “recent revelations”. FTX CEO Sam Bankman-Fried later clarified the exchange was “fine” and that concerns were “false rumours”.

FTT is the 30th largest digital coin with a value of $2 billion, according to CoinMarketCap. Amid talk of pressure on FTX’s financials, FTT lost one-third of its value and dragged down other major digital assets.

Cryptocurrency companies have been reeling from a major rout this year as higher interest rates and escalating worries of an economic downturn pummeled speculative assets.

Key players such as Voyager Digital, Three Arrows Capital and Celsius Network collapsed while hundreds were laid off in the sector. Bankman-Fried had stepped in to shore up such companies and aggressively acquired assets, technologies and customers at cheap valuations.