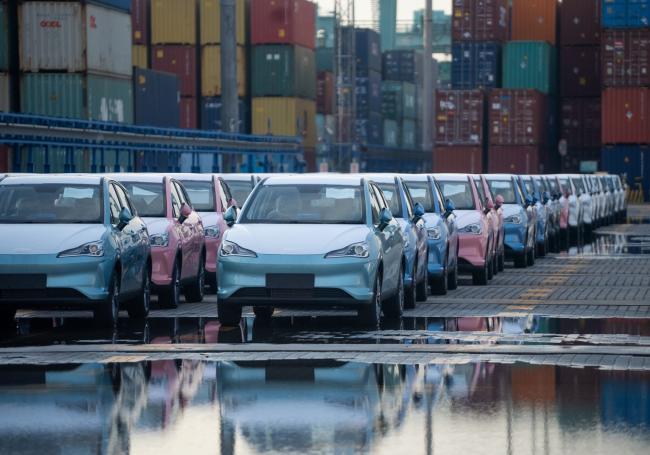 (Bloomberg) — In Europe, a flurry of Chinese carmakers are trying to unseat storied legacy brands. Half a world away and far from the buzz of the Paris motor show, a similar revolution is playing out in Southeast Asia, in Thailand, where China’s auto manufacturers are facing off against Japanese incumbents.

Chinese automakers aren’t just setting up shop and building out supply chains. China is also exporting a record number of new-energy vehicles to Thailand — some 59,375 units from January through September, up 176% from the same period of 2021, China Passenger Car Association data show. Thailand now ranks third as an export destination for Chinese EVs, behind Belgium and the UK.

One reason for the attraction can be found in Thailand’s past, and a willingness to leverage that experience as the world goes green. Thailand’s status as the largest auto manufacturing hub in Southeast Asia and No. 10 in the world has won it the moniker of the Detroit of Asia. Its comprehensive supply chain feeds scores of factories, mainly owned by Japanese companies, producing internal combustion engine cars.

In February, Thailand became the first country in the region to offer cash subsidies — up to 150,000 baht ($4,000) — for passenger electric cars. The government is mulling battery subsidies to further reduce the cost, a move that would add to the some 43 billion baht of tax cuts and incentives for EVs so far.

Battery-powered cars from China are also exempt from most import and excise duties until the end of 2023, though in return, automakers have to commit to producing locally beginning in 2024. Thailand has said it wants 30% of its total car output to be electric by 2030.

“Our policies show how determined we are to become a global EV production hub,” Narit Therdsteerasukdi, the secretary-general of Thailand’s Board of Investment, said in an interview with Bloomberg. “That’s boosted confidence and brought in many new players. Of course, most of them are from China. And more will likely follow.”

Indeed, foreign direct investment from China in the first nine months of 2022 has doubled from a year ago, government data show. Much of that investment has flowed into Thailand’s EV sector, Narit said.

“The incentives add up,” BloombergNEF mobility analyst Allen Tom Abraham said. “This window from now till around 2024 or 2025 gives Chinese automakers an opportunity to export their excess vehicle capacity to Thailand and test the market.”

Under President Xi Jinping’s net-zero commitment and push for self reliance in deep tech, preferential policies have boosted the production and purchase of cleaner cars and China’s EV market is now the world’s largest. A cut-throat domestic landscape has spurred rapid innovations in car design, high-tech offerings and other customer-centric services. These affordable, popular EV models are now making inroads into markets once dominated by Japanese and western automakers.

“I wasn’t too sure about Chinese EVs at first because of the generally negative perception around China-made products,” said Thanakrit Dussadeeponphat, who bought an Ora Good Cat EV from Great Wall Motor in October last year. “But I fell in love with the cute design. So I did my research and thought it’s worth a shot.” The vehicle surpassed his expectations, he said.

Thanakrit now runs a Facebook (NASDAQ:) group, Ora Good Cat Thailand, which has more than 92,000 members. The group feed is filled with pictures of the members’ snazzy new rides, first-person road-trip anecdotes and threads on maintenance and technical issues.

The retro-looking car with bulbous headlamps has been the No. 1-selling EV model in Thailand this year, based on new vehicle registration data from the Department of Land Transport. It starts from 763,000 baht — more expensive than in China but cheaper than Japanese EV options.

Hozon Auto launched a 549,000-baht NETA V model in September. The model, which has an AI voice assistant and built-in TikTok app, has received over 5,000 orders to date. According to the Kasikorn Research Center, the market share of Chinese EV makers in Thailand is expected to rise from 58% last year to around 80% this year.

“For us, this is Year Zero of going global and Thailand is our first stop,” a Hozon Auto spokesperson said. “Since it’s a high potential market, laying the groundwork early can give us a first-mover advantage. Thai consumers are also more receptive to Chinese brands because of geography and cultural affinity.”

Though Thailand’s EV market is still nascent, demand in the region more broadly is expected to surge. Home to some 675 million people, passenger EV sales in Southeast Asia are forecast to jump from just 31,000 this year to 2.7 million in 2040, according to BNEF.

Japanese incumbents like Toyota Motor (NYSE:) Corp. find themselves playing catch up. Toyota, which commands about one-third of Thailand’s auto market, only plans to launch its first battery EV model in the country later this year.

“Thailand is an important hub for our development, production and exports in Asia, and we’ve been there for 60 years,” Toyota said in a statement. “Toyota would like to offer a range of options on the road to a carbon-neutral society. We’re confident in maintaining and expanding our market share.”

And to be sure, Chinese automakers still have a long way to go. In Thailand, the top five Japanese carmakers have a combined market share of almost 80%. To compete, Chinese brands will need to build sales and service networks from scratch, as well as trust, which can take decades.

“It’s too early to say if Chinese brands can dominate,” BNEF’s Abraham said. “Japanese carmakers are waiting for sufficient economies of scale before they come into the EV sector” and the current EV volumes in Thailand don’t justify any major pivot at this stage, he said.

More competition may change that. BYD’s Atto 3 electric SUV went on sale this week and Tesla (NASDAQ:) Inc. has been expanding its presence with a hiring spree in Bangkok.

“Our International Motor Expo at the end of the year is going to be heated,” Narit said. “Brands that we’ve never seen before will be launching new models, pitting EVs against each other.”

State of the Union shows Biden focused on 2024, not economy, inflation

Edward Leclair: Paedophile takes his own life in court