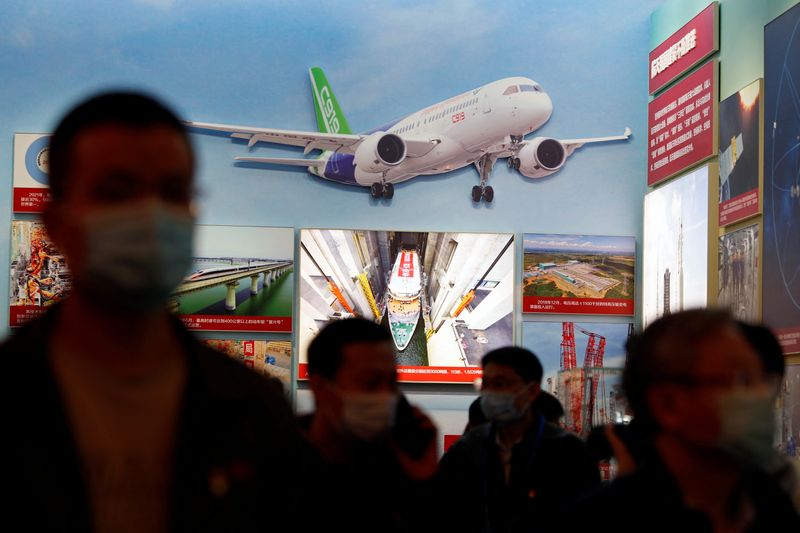 © Reuters. FILE PHOTO: Visitors walk past a display of Chinese passenger jet C919, at an exhibition titled “Forging Ahead in the New Era” during an organised media tour ahead of the 20th National Congress of the Communist Party of China, in Beijing, China October 12

By Sophie Yu and Brenda Goh

As with previous announcements, it was not immediately clear how many were firm orders or expressions of interest, and no delivery dates were provided.

Before the latest deals, there had been 815 orders for the C919 from 28 customers, according to COMAC’s website. But China Eastern Airlines (NYSE:) is the only customer that has announced a firm delivery schedule. It expects to receive its first plane in December and another four next year.

The C919 is China’s rival to the popular Airbus A320neo and Boeing (NYSE:) 737 MAX narrowbody jet families, as the country looks to become more self-sufficient.

COMAC said on Tuesday that China would need 9,284 new aircraft over the next 20 years to meet market demand, 200 more than in its forecast last year.

The Chinese plane maker’s forecast is higher than Boeing’s, which predicted last month that China would require 8,485 new planes in the next 20 years.

The U.S manufacturer forecast China would need 6,370 single-aisle airplanes to support its growing network of international and domestic routes in that time, while COMAC said that 6,896 such planes would be needed.

Boeing has been all but shut out of orders in the world’s biggest market for new aircraft since 2017 amid U.S.-China trade tensions, though Chinese airlines have this year agreed to buy more than 300 Airbus narrowbody planes.