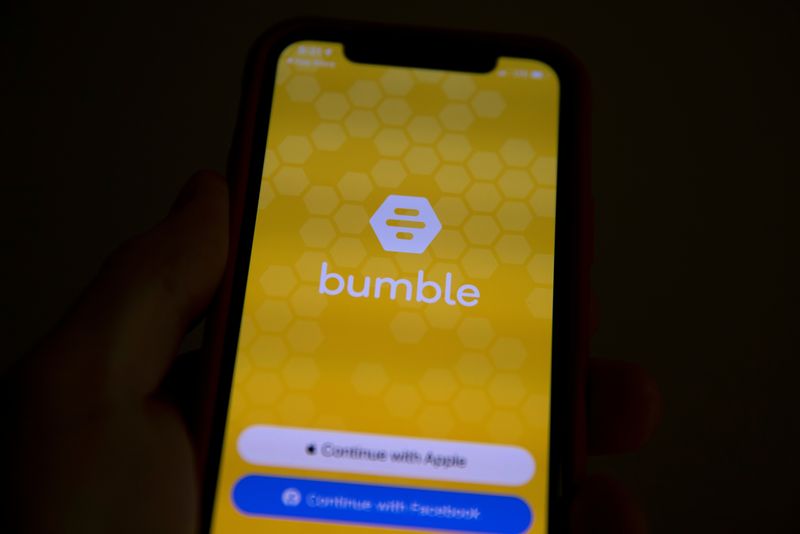 © Reuters. FILE PHOTO: The Bumble Inc. (BMBL) app is shown on an Apple iPhone in this photo illustration as the dating app operator made its debut IPO on the Nasdaq stock exchange February 11, 2021. REUTERS/Mike Blake/Illustration/File Photo

(Reuters) -Online dating firm Bumble Inc on Wednesday forecast fourth-quarter revenue below market estimates, as it grapples with a strong U.S. dollar and the impact from the conflict in Ukraine, sending its shares down near 19% in after-hours trading.

A more than 15% surge in the dollar this year has hit sales of companies across sectors, while the highest price pressures in decades have led consumers to curb non-essential spending.

Bumble also faces competition from larger rival Match Group Inc (NASDAQ:), which topped revenue estimates last week on the back of a jump in paying users for its flagship app Tinder.

Bumble now expects current-quarter revenue between $232 million and $237 million, compared to Wall Street’s estimates of $254.5 million, according to Refinitiv data.

While the company saw a rise in popularity, its sister app Badoo, which is mostly used in Western Europe remains under pressure. Bumble said that it expects to take a hit amounting to $5 million in the fourth quarter, due to the conflict in Ukraine, which would primarily impact its Badoo app and other revenue segments.

Earlier in March, Bumble said it is discontinuing operations in Russia, including the removal of all of its apps from Apple (NASDAQ:) App Store and Google (NASDAQ:) Play Store in Russia and Belarus.

Bumble, which made its market debut in February 2021, said its total paying users increased to 3.3 million during the quarter.

The company, which differentiates itself from competitors by requiring women to make the first move, also has verticals like Bumble BFF and Bumble Bizz that are dedicated to making friendships and professional connection.

NASCAR Star Kyle Busch Says He Was Detained In Mexico Over Firearm, Apologizes