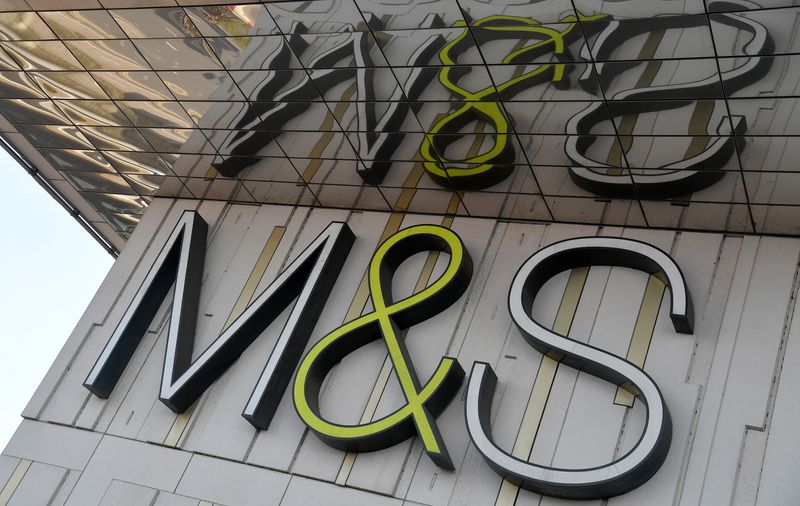 © Reuters. FILE PHOTO: A logo of food and clothes’ retailer Marks and Spencer (M&S) is seen at a branch in London, Britain March 10, 2022. REUTERS/Toby Melville

LONDON (Reuters) – British retailer Marks & Spencer (OTC:) reiterated that full-year profit would fall short of the prior year due to higher costs and pressure on household budgets, as it reported a 24% decline in first-half profit.

The 138-year old clothing and food group, one of the biggest names in British business, on Wednesday reported profit before tax and adjusting items of 205.5 million pounds ($237 million) for the six months to Oct. 1, down from 269.4 million pounds made in the same period last year.

Profits fell despite an 8.5% rise in revenue to 5.54 billion pounds as higher costs weighed and the group missed out on the business rates relief it received from the government during the pandemic and profit contributions from both Russia, which it has exited, and Ocado (LON:) Retail, its online joint venture with Ocado Group .

Prior to Wednesday’s update analysts were on average forecasting a profit before tax and adjusting items of 397 million pounds for the full 2022-23 year, down from the 523 million pounds made in 2021-22.

M&S, whose shares have halved this year, said total food sales increased 5.6% in the first half, while clothing and home sales rose 14%.

M&S is also facing higher labour and energy costs, and a stronger dollar that will push up its purchasing costs, while consumers’ disposable income is falling amid a worsening cost of living squeeze.

It said trading in the first four weeks of its second half was in line with forecasts, with clothing and home sales up 4.2%, food sales up 3.0% and international up 4.1%.