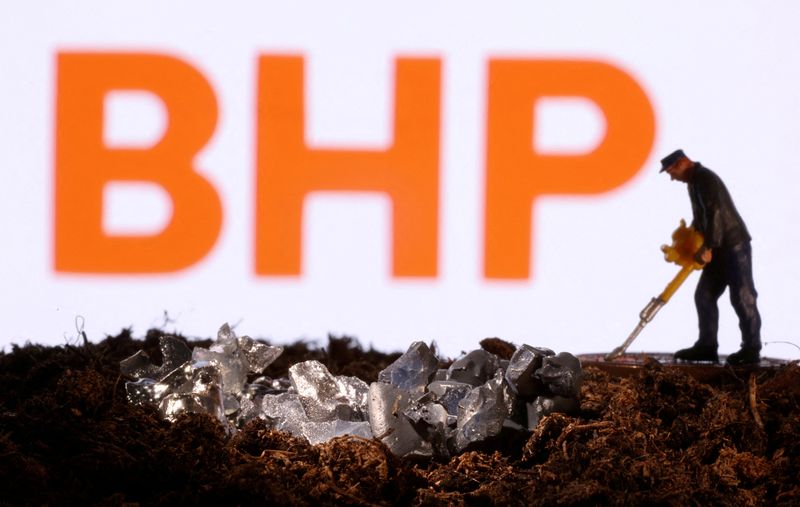 © Reuters. FILE PHOTO: A small toy figure and mineral imitation are seen in front of the BHP logo in this illustration taken November 19, 2021. REUTERS/Dado Ruvic/Illustration

SYDNEY (Reuters) -Australia is set to benefit from the growing interest in environmentally sustainable mining and minerals needed for decarbonisation, the chief of BHP Group (NYSE:)’s nickel operations said.

The U.S. Inflation Reduction Act passed in August, which allows for significant tax credits in the processing of battery cells, and the European Commission’s Battery Recycling initiative are examples of governments’ greater focus on electric vehicle (EV) minerals such as lithium, nickel and , according to Jessica Farrell, Asset President for BHP Nickel West.

“Australian companies are well placed to be a partner of choice, recognising our efforts to address these ethical and environmental concerns, and Australia is a favoured jurisdiction from which to source commodities,” Farrell said in a speech at an international mining conference in Sydney on Thursday.

Several American firms, from mining to automobiles, have looked to collaborate with Australian nickel and lithium miners since the act was passed.

BHP, through its Nickel West unit, has the second largest nickel sulphide resource base globally, and has plans to increase its spending on nickel exploration over the next two years.

BHP wants to see Australia mandate all new cars to be electric by 2035 and provide infrastructure for this policy, Farrell said.

“In Australia, Canberra was the first jurisdiction to mandate that all new cars must be electric by 2035, and with significant incentives. A decision we hope other states will replicate and, more importantly, support the infrastructure needed for its success,” she said.