Asia stocks advance ahead of Fed rate decision By Reuters 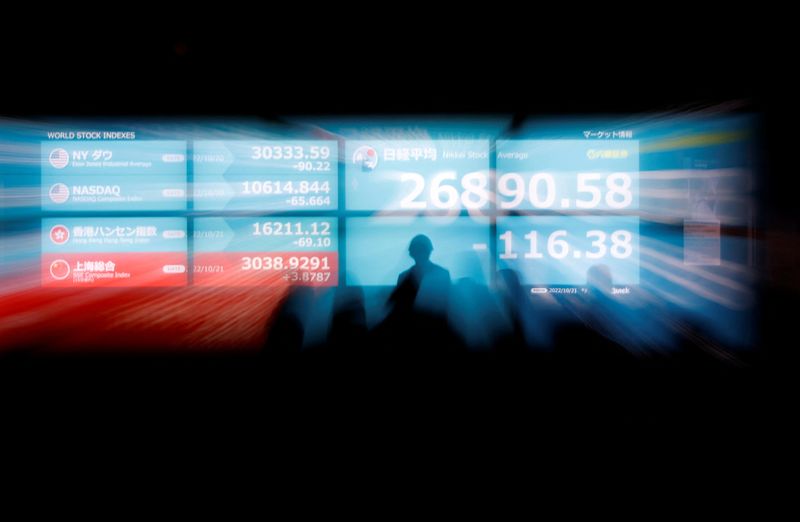 © Reuters. FILE PHOTO: Silhouettes of passerby are seen as they stand in front of an electric monitor displaying Japan’s Nikkei share average and world stock indexes outside a brokerage in Tokyo, Japan, October 21, 2022 REUTERS/Issei Kato

HONG KONG (Reuters) -Asian shares advanced while bond yields eased slightly on Tuesday following mild losses on Wall Street as investors turned their focus to the U.S. Federal Reserve’s policy meeting this week for hints on what comes next.

The central bank is all but certain to raise interest rates by 75 basis points on Wednesday, but investors will look for any signals the Fed may be considering a deceleration in interest rate hikes in the future.

Apart from the Fed’s rate decision, the market will also focus on U.S. jobs data on Friday and Chinese economic activity data this week.

“It was a mixed start for risk assets as a big week of central bank decisions gets underway,” said ANZ analysts in a note.

In Asia, MSCI’s broadest index of Asia-Pacific shares outside Japan was up 1.7%, largely thanks to the rebound of Hong Kong and mainland China stocks.

“The market rally in both mainland China and Hong Kong today was partly driven by some investors’ bet that Beijing would have to revise its strict zero-COVID policy in the near future,” said Zhang Zihua, chief investment officer at Beijing Yunyi Asset Management.

“Also, several tech stocks have been trading at historical lows in Hong Kong in recent weeks. Investors thought it’s a good window to buy into them.”

Australian shares were up 1.65% in afternoon trade, with the mining index leading the gains.

The country’s central bank on Tuesday stuck with a slower pace of interest rate rises for a second month while revising up its inflation outlook, reiterating that further tightening was likely.

stock index rose 0.22% on strong outlook of some companies amid a mixed earnings season.

Hopes the Fed may pull back from its aggressive interest rate hike policy lifted U.S. equities last month with

In currencies, the dollar was firm against the struggling Japanese yen to 148.34 yen and rose to $0.991 per euro on Tuesday.

Japan’s finance ministry on Monday said it spent a record $42.8 billion on currency intervention last month to prop up the yen.

China’s yuan hit a near 15-year low against the dollar on Tuesday, after the central bank fixed the official guidance rate at its lowest level since the global financial crisis of 2008.

The in afternoon trade reversed losses and bounced to a high of 7.26 per dollar. [CNY/]