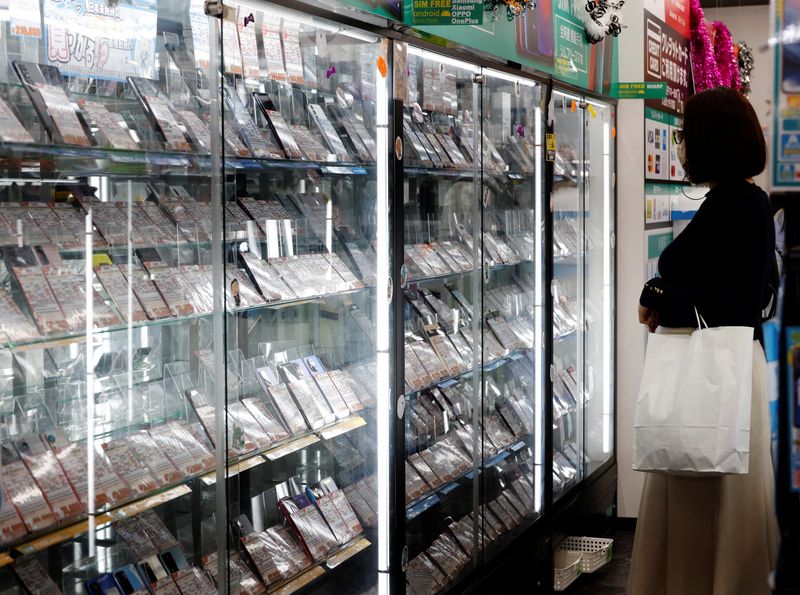 TOKYO (Reuters) – For years Japanese shoppers eagerly shelled out for the latest gadgets, but now a tumbling yen has put new iPhones out of reach for some and sparked a growing secondhand trade in a major market for Apple Inc (NASDAQ:).

The Japanese currency’s fall to a 32-year low against the dollar has squeezed consumers and accelerated a broader spending shift in the world’s no.3 economy. Industry watchers say Japan’s shoppers have become more open to buying secondhand, thanks in part to the rise of online auction sites.

In July, Apple hiked the price of the entry-level iPhone 13 by nearly a fifth. The basic iPhone 14 later debuted at 20% more than the iPhone 13 did, even as the U.S. price stayed flat at $799. While the dollar has surged against global currencies this year, the yen has been particularly hit, dropping 22%.

Salaryman Kaoru Nagase wanted a new phone but couldn’t justify the price of a iPhone 14, which starts at 119,800 yen ($814). Instead, he bought a used iPhone SE 2 in Tokyo’s Akihabara electronics district for less than a third of that.

Apple declined to comment for this story. But in an annual regulatory filing last month, it said Japan sales fell 9% in the year ended September 24 due to the yen’s weakness.

Apple Chief Financial Luca Maestri also acknowledged to analysts last month that the strong dollar had led to price increases for its products in some countries, but sales had still grown by double digits in Indonesia, Vietnam and other markets facing currency challenges.

Sales of used smartphones grew nearly 15% in Japan to a record 2.1 million in the last financial year and are likely to reach 3.4 million by 2026, according to technology market research firm MM Research Institute.

Taishin Chonan bought a used iPhone 13 after the screen cracked on one of the two devices he carries for personal use. The replacement has higher resolution and a better battery and camera than the iPhone 7 he had been using.

“Up until now I’d only ever bought new phones, this is my first time buying used,” the 23-year-old said. “The new models are expensive.”

Even after the price hikes, the iPhone 14 sold in Japan is the cheapest among 37 countries when tax is taken into account, MM Research Institute said in a September survey. More yen weakness could prompt Apple to raise prices again, the research firm said, potentially denting its hefty 50% share of Japan’s smartphone market.

The latest iPhones are now priced above the 100,000 yen level that is a “major psychological barrier” for many shoppers, said Daisuke Inoue, chief executive of Belong Inc, a unit of trading house Itochu Corp. that sells used phones and tablets online.

Average sales on Belong’s Nicosuma e-commerce site have trebled since Apple raised prices in July compared to the average over the previous three months, Inoue said. At Belong’s operations centre outside of Tokyo, shipments of used phones were unboxed and sorted before being inspected, graded and cleaned by rows of workers at long tables.

The phones were then photographed from multiple angles for sale online. Belong uses Itochu’s global network to help it source used devices both in Japan and overseas, depending on where the best prices are, Inoue said.

Some of the devices are bought from businesses, such as tablets previously used for payments in cafes or displays in taxis, he said.

Many Japanese have traditionally been wary of secondhand items, including electronics, but that is changing.

With Japan open again to foreign tourists, the secondhand iPhone market is getting another boost.

“The yen just keeps weakening,” said Iosys executive Takashi Okuno. “That trend of visiting Japan and buying an iPhone is coming back.”