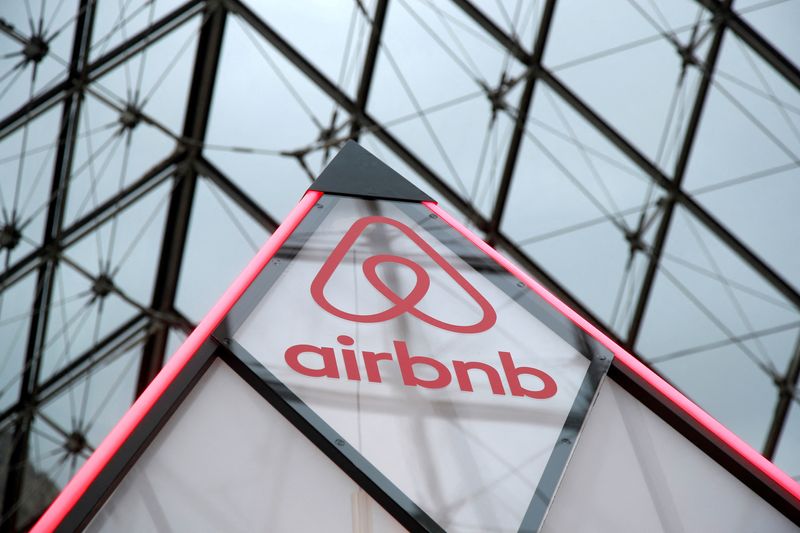 © Reuters. FILE PHOTO: The Airbnb logo is seen on a little mini pyramid under the glass Pyramid of the Louvre museum in Paris, France, March 12, 2019. REUTERS/Charles Platiau/File Photo

(Reuters) -Airbnb Inc forecast fourth-quarter revenue below market estimates on Tuesday, saying a strong U.S. dollar had started to pressure its business and that bookings would moderate after a bumper third quarter.

The vacation rental firm expects fourth-quarter revenue between $1.80 billion and $1.88 billion, the midpoint of which missed analysts’ expectations of $1.85 billion, according to Refinitiv IBES.

Shares of the company fell 6.7% in extended trading.

The industry has seen a stellar recovery this year on the back of the best summer travel season in three years, but it faces risks from the global surge in inflation.

San Francisco-based Airbnb recorded its highest ever third-quarter bookings, with nearly 100 million nights and experiences booked, but it said current-quarter bookings will “slightly moderate” from those levels.

“As the impact of the pandemic recedes but macro conditions persist, we expect a continued, albeit choppy, recovery of cross-border travel to be a further tailwind to future results,” the company said in a letter to shareholders.

Still, it is “well-positioned for the road ahead”, the company added, after surpassing quarterly revenue estimates.

Major U.S. airlines have pointed to a rise in international trips, especially to Europe, as travelers took advantage of a strengthened dollar, but Airbnb said the majority of travelers in North America and Europe had booked domestic stays.

The average daily rates for Airbnb climbed 5% year-over-year to $156 in the quarter as hybrid work fueled demand for its long-term vacation rentals, encouraging hosts to charge more.

The company, which generates half of its revenue from listings outside the United States, said the rates were significantly higher excluding the impact of foreign currency fluctuations.

Best Super Bowl commercials and where to get the products